The demand for loose 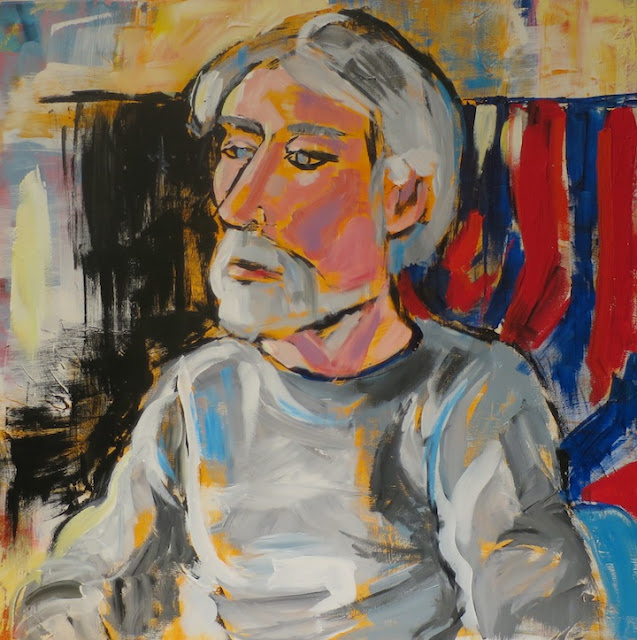 Grey Love
Acrylic on canvas
24 x 24 inches
Barbara Muir © 2018
In my art sometimes I'm loose, and sometimes uptight.
I like some of the work that develops from both states,
so I can't yell out that loose is better -- but I sure enjoy
watching loose painters like Susan Rothenberg, and
Bob Burridge paint.

In the past week I've watched videos of a few super
loose and dynamic painters painting, which is
probably why I could get this portrait painted last
night at my art group in such a short time.  I felt
happy to have a good size canvas prepared.  I loved
having a group of creative people around me --
and away I went.

Seeing the model at first, who was shy, (and I didn't get his
name, I'm sorry), I would not have expected this painting.  But
it flew out of me, and the model was brilliantly inspiring
in his steady, non assuming pose.

So there you have it.  Thank you to loose painters everywhere.
I will join you from time to time. And thank you to my
art group.

Have a painting the town day.
Posted by Barbara Muir at 2:05 PM 12 comments: 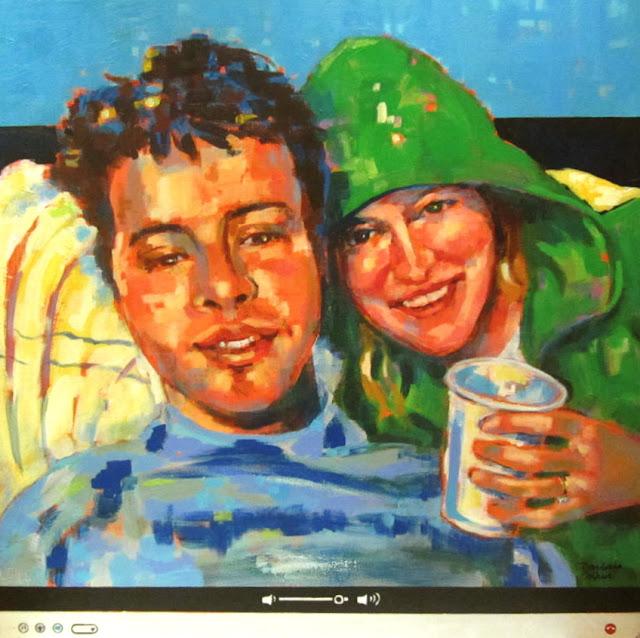 A friend and I were talking today about fear of the unknown,
and how it hinders an artist's life.  Then I was looking for a photo
of my art for a Facebook cover, and found this image of my son
and his then girlfriend, now wife, Megan.  It was a Skype painting.
Enter fear.

I was afraid of starting a blog, and my friend and fabulous
artist Flora Doehler persuaded me to do it.  Christopher
was going to teach in Korea for a year, and helped me
get started before he left.  Once he and Megan were in Korea, Skype
was the best way to talk, and not feel so far away.  During
conversations with Christopher I'd draw him on sticky notes
or whatever was on my desk.  Then I did a little sketch painting
of my friend Flora via Skype, and published it on my blog.

When Chris and Megan were heading for Korea I was so
anxious about those two being so far away -- a 14 hour plane
trip.  When I started using Skype I was afraid I'd mess it up.
But I got a job via New York company drawing people via Skype at the
Consumer Electronics Show in Las Vegas and did not
know that my Skype images were being broadcast on a huge
screen at the show. That connection led to journalist Howard
Wolinsky from Chicago calling and asking to see my Skype
paintings. Howard interviewed me on a YouTube video for the Skype
blog, I was terrified.  He asked me if I could get some new paintings
together in a week, so I did.  (Deadlines always help).

Oprah Winfrey's people saw Howard's YouTube video, and asked me to
be on a show called Where In The Skype Are You?

I have never been so frightened in my life. But I did it -- and do
you see where I'm going with this?  Essentially if you follow the
dots -- Christopher and Megan going to Korea got me on Oprah.
And that show got me media attention, invitations to exhibit in art
shows internationally.

So yes fear is bad, and yes there are things to fear -- but some of
the things we fear -- especially when it comes to art -- will bring
us miracles.

Oh yes.  This is important!  After a year in Korea Christopher
came back to Toronto to work as a photographer, and then a director of
videos. Megan is working on her PhD in Early Childhood Development.
They are married now, and have a beautiful, brilliant daughter --
Alice.

Have a letting your fear go day.
Posted by Barbara Muir at 7:12 PM 8 comments: 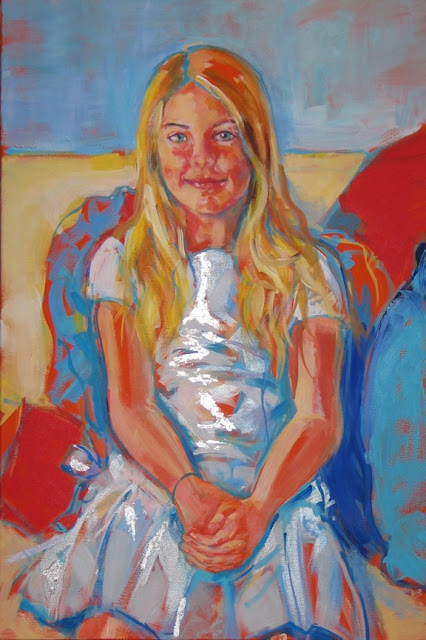 Madeline
Acrylic and silver leaf on canvas
24 x 36 inches
Barbara Muir © 2006
I'm going to call today "Sorting through Saturday".  This
painting popped out at me when I was going through my
photo files and I realized it was one of my favourites. I
like it--I love how loose it is, how it captures that little girl,
Madeline, so well, and the sterling silver leaf used on the front
of her dress -- which I had to repair after the painting sold,
because I'd been using gold leaf which doesn't tarnish on other
works, and I didn't know then that you have to glaze silver leaf
so that it doesn't.

That was painted in 2006 when Madeline was 11, so she must
be 21 now.  The last time I saw her I was visiting her mother (the collector's)
house when Madeline was about 16.  Not surprisingly
she had grown up into a beautiful young woman. 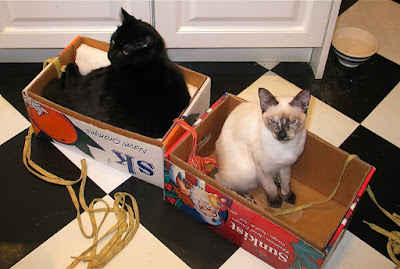 Timbah (left) and Fiona in the cat train
She was a pleasure to paint.  In between sittings we used to go
and sit in the garden to talk sometimes, and she got us to make
a "train" out of boxes for the cats to pull along the floor.  She said
that the cats wanted a train, and she was right.  They did.

Have a fun sorting your things Saturday
Posted by Barbara Muir at 2:19 PM 2 comments: