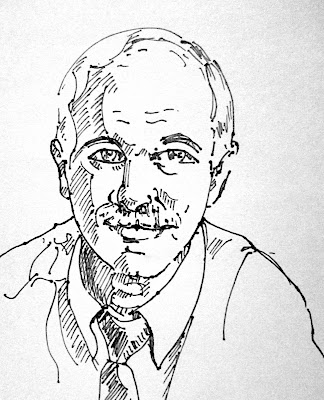 Jack Layton
Marker on Canson drawing paper
9 x 12 inches
Barbara Muir © 2011
(The image I used is in many places, but
I found my reference here.)
Jack Layton, the leader of the New Democratic Party in
Canada, died this week of cancer.  His bravery in continuing
to work and campaign with prostate cancer, to win a
major victory by bringing his party into official
opposition in Canada has moved many, many Canadians
deeply.

So many of my conversations in the last two days have been
with people who were moved by Jack Layton's vision for
a truly democratic Canada, and who knew him personally.
I had dinner tonight with a friend who had campaigned for
Layton twice.  I didn't know him, but it would be hard
not to notice his values, ending violence against women,
saving the environment, and when he got cancer, trying to be
a voice of hope to other people with the disease.

I have been working on commissions, and unable to post them
yet, but I wanted to do a sketch of Jack.  So here it is.
the reaction to Jack Layton's death here is unprecedented.
People wrote notes all over a wall and the entire public
square at city hall in downtown Toronto, and there have
been impromptu memorials and tributes in cities and towns
all over the country.  Layton wrote his final message to Canadians
with the help of his wife and colleagues, just two days before he
died.  His incredible courage, and the love letter to Canadians has
touched the hearts of everyone I know. We sat at the dinner table
the other night listening as the letter was read on CBC, and Steven
and I were deeply moved.  It didn't matter that we'd read the letter
in the morning paper. The words resonated and were touching in
their direct simplicity.

My thoughts are with Jack Layton's wife and family, and I hope
his message to Canadians can galvanize all of us, whatever our
politics to create positive change in how we run our country.
Posted by Barbara Muir at 10:10 PM

I am so sorry for your county's loss. The world needs more leaders like Jack Layton.

It's a beautiful portrait.

It has been so beautiful the past couple of days. But today the storm was scary. Yes dear Canada needs better days politically. I still feel hopeful about that.

It was the earthquake from Virginia.
People felt it yesterday in the office towers, but I didn't feel this one. Last summer's quake was more dramatic -- I thought the construction on our street was causing it. But the storm tonight was something, and there may be more. Tornado warnings and all. Crazy because none of us have the slightest idea of what to do in a tornado. I think the storm's gone.
xoxoxoxoxoBarbara

This is a huge loss for our country, for many different reasons, but an even larger loss for his family... and that's where my thoughts are, too.

Barbara, that is a lovely tribute you've written for Jack. Thank you.
What a loss to the country and to his family.
I am grateful to him that he moved the idea of a a democratic, socialist, green world forward and was able to articulate that vision so well to so many people.
xo Flora

As a European I don't know Jack Layton but your drawing of and post about him make me regret that I didn't know about him earlier. He truly seems to have been a wonderful man! Your drawing, Barbara, expresses so much warmth and kindness - super!

you have really captured the man in a few simple lines, quite wonderful Barbara.

I was in Nova Scotia when he stepped down and didn't see the news. I watched that speech yesterday, and was so moved by his grace. I so wish he'd made it through.

I am just so impressed by his courage, his determination and energy in the last six months -- coping with cancer and the treatments that whole time. To win the official opposition took all of his strength. That part is so sad.

Thank you. I always love your paintings.

Thanks so much. That means a lot to me coming from you -- a wonderful portrait painter. Hope all is well with you. Love your painting of the harbour.

A beautiful drawing!
We heard this very sad news on CBC last Monday while we were caught in a dismal traffic jam on the Lakeshore and QEW. Even though I wasn’t really surprised, I still found the news totally jarring.

Years ago I knew his wife, Olivia when we were both students at art college and through a close mutual friend at the u of Guelph .

Last year, early October, I remember seeing jack Layton in east Hamilton when he attended and spoke a few words at the memorial service of a friend and great labor organizer whose death was also untimely and tragic. At the time I was shocked to see how thin Layton had become but everyone knew he’d been undergoing treatment for cancer. But he couldn’t stay away. Ironically both men, working for social justice, were from Montreal,
David was at a vigil last night for Layton and while candles were lit and speeches and singing were going on, a huge tour bus pulled up alongside the gathering with the words ‘GREAT CANADIAN’ written over it and the bus driver stopped, leaned out and honked – how appropriate!

Oh Barbara, this is a tender sketch of Jack Layton and it captures him beautifully. You definitely "got" him. It's been lovely to see the outporing of love and respect from everyone. It's hard to believe he's gone.

Thanks for this. I think Jack Layton's bravery in the face of his cancer was astounding.

The affection Canadians are expressing is so moving. Thanks for your kindness. Your work is gorgeous.