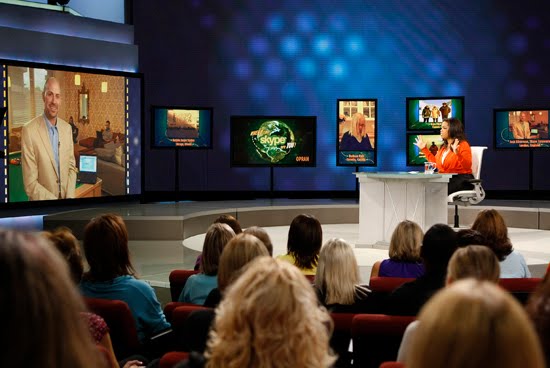 Here's a photo from the taping of the Oprah Winfrey show
back in 2009. The woman with her head down
drawing beside the Skype symbol is me.
I am trying to capture Oprah when she looks
in my direction.  I've never been quite as excited and
scared at the same time.
One of my former students is my friend on Instagram. I don't
remember whether I taught him English or Positive Psychology,
but he was an amazing person.  He'd been through so much already
at a young age, and it makes me so happy seeing that as a young
man he is (was before COVID) travelling the world, and living
a very good and happy life.

Before I was on the Oprah Winfrey show in May 2009 I was
teaching at Seneca College, and the student I mentioned was
in my class.  I was trying to psych my students up to dream big, and
I used to say to them -- "You watch me I'm going to be on the Oprah
Winfrey Show one day!"  Then I used to put my hands in the air, and
say, "Yes!"  Of course what I was trying to do was to be as way
out into the universe as I could possibly be about dreaming big.
I have loved Oprah and all that she does since the first time I watched
her show.

Then the call came.  It was Oprah Winfrey's staff asking if I could
draw Oprah live on a taping of her show via Skype.  Howard Wolinsky,
a Chicago journalist (and wonderful writer and photographer) was
writing a blog for Skype and he did a YouTube interview about me,
which caught Oprah's staff's attention.  After I was on the show there
was a high time of very cool art assignments and a flurry of
TV and media interest.

The fall after I was on Oprah's show,  I was walking down the hall at Seneca,
going to teach and I met the student I mentioned.  He
asked me how my summer had been, and I told him I'd been
on the Oprah Winfrey show in May.  He went crazy.  He walked
with me down the hall all the way to my class yelling, "No!  You're
kidding Miss.  You are kidding!  This is a life lesson.  Miss this
is a life lesson!"  Then he came into my class and told the new
group how wonderful I was.

I teach at a different college now,  but that is one of my favourite memories
at Seneca, and I'm so happy my student is living his dream.
Posted by Barbara Muir at 11:22 PM