The Iron is Hot 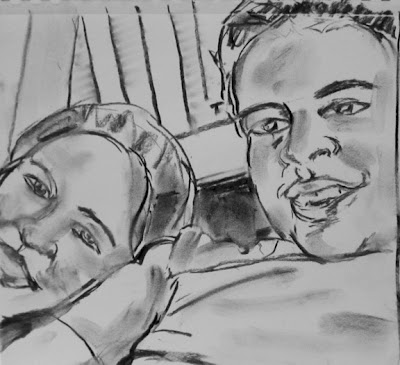 Morning in Korea
Charcoal on bond paper
12 x 14 inches
Barbara Muir © 2011
The old saying "strike while the iron is hot," stuck
in my mind today as I thought about the events of
yesterday.  Those involved the taping of the
CityLine show, (so fun) and a mad dash in the night
with my photographer son to access a photo that
had to be sent off right away!  It snowed
last night, and the car skittered and slid its
way around town despite the snow tires, making
us very suspicious indeed.  But that's for
another day.

Today I'm showing you a rough drawing for
a painting I'm working on.  I'm falling in love with the
Skype theme all over again, and am doing
more than one series of paintings using this
theme and references.  Next week school starts
and the fire of creativity that has been burning
in my studio since 2011 began will have to
accommodate my school schedule so I am
striking while the iron is hot.

My son thought it would be cool to suggest
the pixilating image you sometimes get when a
video image crosses a vast distance.  So I may
try to integrate that into the painting. As a start
I dug a textural grid into the ground with a wide
comb.  It may not even show through, but it also
guides me when I want to make a jagged
(pixilated) edge.

I like the idea of old world technique combined
with a techno world reality.  So that's what I'm
going for and will show you when the image is
ready.  For now enjoy this sketch.

P.S. Yesterday my son showed me the dinner he
was cooking as he cooked it, via Skype on his
iPhone. I thought of how dazzled my father would
be both by the technology, and his grandson who
works in the kind of photo studio my "pro-amateur"
Dad would have absolutely loved.
Posted by Barbara Muir at 9:23 PM