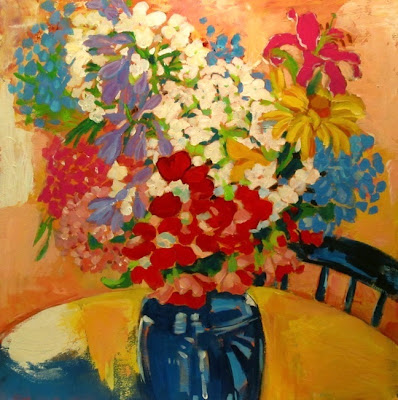 Flowers at the cottage(work in progress)
Current version 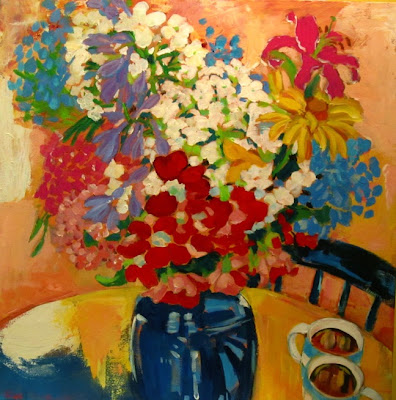 Here's the painting I'm working on right now for an
upcoming November show with my friend Gill Cameron.
It's a larger version of yesterday's painting.  I am close to
finishing it, with a few details here and there to
decided on.

Since the outset I have tried putting cups
on the table twice.  First it was espresso cups, but
they looked silly.  So small with the giant bouquet.
Then today I tried coffee cups, but I just could not
get them to do what I was hoping for.  In the end
I removed them, and we'll see what tomorrow will
decide.  I may just go for a simple shadow, and leave
it.  There will be more to come.

The bouquet was from my friend Ken's garden in Pugwash,
Nova Scotia.  Ken is one of the best gardeners I've ever
met.  He has created three varieties of petunia which are
in every hanging planter I've seen.  I even have a planter
with one of his flowers in it, here in Toronto, where it
is extremely popular.  He's also a super nice guy. And he
wanders around his garden talking while he picks the blooms
for me.  The whole experience is awesome.

Have an enjoying the flowers in your life day.
Posted by Barbara Muir at 10:32 PM

Cannot wait to see what you do with this one. I do agree it needs something in that corner - I am sure you will figure it out. I really like this one!
Tam

Gorgeous color, Barbara! Probably just some color shifts in the corner would finish it. I love the flowers!

Beautiful colours and abundance, and I agree, it was the right decision to take away the cups! For me, it doesn't really need anything else in that corner, because the chair already balances the picture.

Hey Barbara - just chiming in here. I like it as is and it feels right to me. My eye moves around, everything feels well-weighted. I'd leave it - it's gorgeous!

I'm adding my two cents- because that is all my thoughts are worth... :o)

I think it is good the way it is- I think it is better without the coffee cups. I find them distracting and to me it is all about those gorgeous flowers.

You'll know when it is done and when it is right. It needs to fit your vision first.

Thanks so much. Ultimately I don't think I'm doing much more. But I'll let it sit and see what I think.

Yes I'll think about that. Thanks so much. I love the flowers too, and the real ones were beyond awesome.

Thanks for your thoughts. I agree with you. I've decided to let it sit while I work on something else. There is always something else to do while it cooks for a day or so.

I love your beautiful tree. I hope you just let it be. Someone is going to buy that baby right out from under you. I know it.

Thanks a lot. We all seem to go through this putting it in, taking it out, adding to it, subtracting from it. I'm so glad I have friends like you on the net to hold my hand when I don't know which end is up. I take great comfort in your encouragement.
Now...back to work for me.

Funny, but I like the striped coffee cups...maybe they just want to cozy up to the vase - or not!

Your florals are absolute crackers Barbara. How you do that with acrylics I'll never know.