Painting more flowers, and acting in a movie! 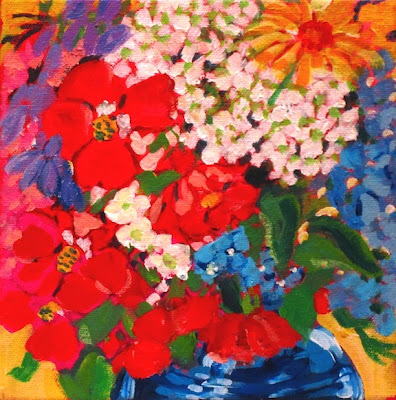 More flowers from Ken's garden
Acrylic on canvas
8 x 8 inches
Barbara Muir © 2011
(Once again I'll get a better shot
of this tomorrow in daylight.)
Today I worked on a small painting, that I'm doing on
a larger scale for an upcoming show.  I may add a few
touches to it tomorrow, but I'm pretty happy with it.

Our big news today is that Steven and I played a Mom
and Dad in my son Christopher's movie "Bye".
The movie will be a short film, and we play the
parents of the girl in the love story.  Our afternoon
was a small version of the big time.  We sat in a
modified bus (a bit like the trailers the stars have)
and waited to be called. Then we went into hair
and make up, and watched a few scenes until it
was our turn. 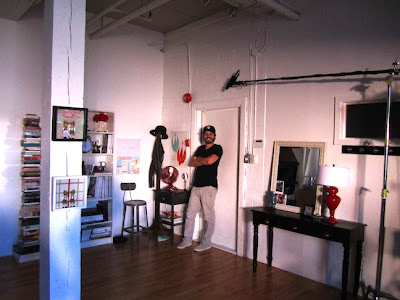 Christopher on the set of his new movie today.
You can see the microphone coming in over his head. 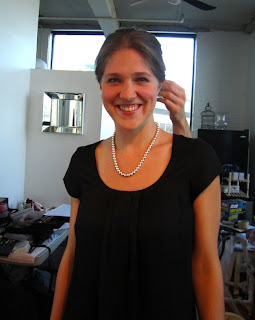 Megan getting adjustments to hair and make-up.  We didn't
actually count the crew, but there were probably between
15 and 20 people involved including the actors.
It was a lot of fun, and I can't wait to see the final
product.  Our family is pretty arty, what with Sam
studying acting at the University of Windsor, Christopher
a graduate of that program, a full time photographer,
now starting to direct films, my nephew John
Rannells in Pasadena, who just had the first showing
of his new movie, Ruby Booby in Los Angeles, and a
niece who is a jewelry designer, maternity clothing designer,
and has just launched an awesome and artistic
play kit for kids called KidKits.  It seems like
everywhere we turn something exciting is going on.

If my father were alive I'd tell him what he'd started
with his fabulous photographs, and love of art.  We
are hooked to the third generation, and beyond.

Have a supporting-your-family-in-their-creative-acts day.
Action!
Posted by Barbara Muir at 10:33 PM

Oh I love this post Barbara! That's so cool. And I love your painting - joyful!

Can't get enough of this bright floral delight! Great work, Barbara! Love the post as well.

Barbara the shing star- such fun!
I love your flower painting!!

Whoops- that needs to read "Shining Star!! What is a shing star? Are you one of those, too, Barbara?

Thanks so much. It was ultra cool. A little excitement on a beautiful Sunday.

Thanks so much. I do love watching how people work together to put a movie out. It's a big deal -- lights, cameras, action, sound, continuity, hair stylist, make-up, wardrobe, gaffer, producer, director, actors, -- really impressive. A lot of work.

In Chinese Shing is a boy's name that means victory. Some with that name is usually good in the arts, creative and charming. I feel like you've complimented me double. I am not a boy, but other than that I'll take it all. Plus I would really like to learn how to speak Mandarin and Cantonese. So see how right on you are! Thanks Linny for your lovely support. I love your latest painting big time.

And Linny my comment should read, "someone with that name...etc."

We artists are tired.

Barbara, I just watched the trailer for Ruby Booby. It looks GREAT and I soooo want to see it!
How fun was that being in a film of your son's. Wow! Hollywood north, eh> :-)

It was really fun. Yes Hollywood North. I would love to see Ruby Booby too. And I can't wait to see Christopher's movie, though the trailer on his iPhone made me cry.
Which is good. That's before we landed parts in it. (Very short parts). I love your movie of your show. Lovely work. I'm sure you're having a fabulous time.

I love this post too. You have one fun and creative family!

Our family is amazingly creative. I don't know how that happened. I think it's because we kept the kids in lessons so they wouldn't hang out at the mall! Who knew?

I love the painting - those flowers fill the entire canvas with joy.

And how fun is the rest of the post? Very exciting stuff going on over there in your part of Canada!

It's true. The last couple of weekends have been very dramatic! A lot of fun too. I love your paintings.