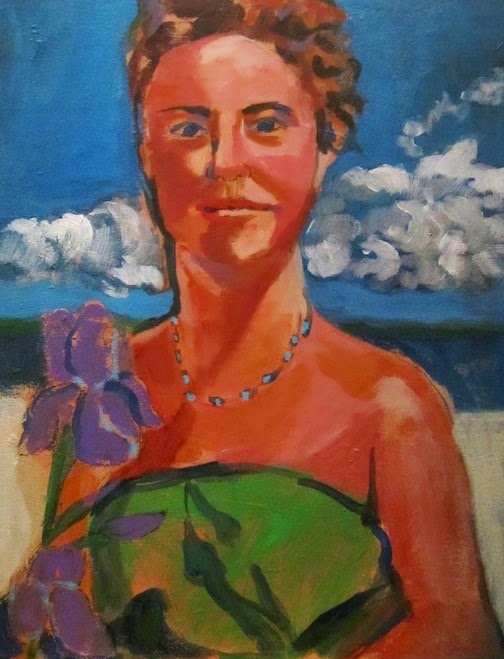 Beach Prom Queen (art group sketch)
Acrylic on canvas
16 x 20
Barbara Muir © 2014
Okay I confess I'm on a serious Joshilyn Jackson
kick.  I've read five of her novels in the past five
weeks.  The last one Gods in Alabama was such
a page turner that I could hardly put it down.

Our model at the art group I belong to tonight
could be right out of a Joshilyn Jackson novel,
except for the fact that she's not from the deep,
American south.  I sat on the couch in the big
studio room with a friend listening to the grim,
but compelling story of her childhood -- and was
both glad and almost sorry to get up and paint again.
She had resolved to her dolls as a child, to give
her children the complete opposite -- a safe, loving
home -- and has succeeded.

When I arrived she was posing with an Iris.  The
whole set up reminded me of a dream I had
yesterday and I happily painted for an hour
and a half, coming away with this impression.
I don't know the model's name, but I thank her.

Have a-reading-a-good-book day.
P.S.  My sister got me started reading Joshilyn
Jackson's books, and I am now hooked.
Posted by Barbara Muir at 9:05 PM

beautiful. I haven't read that author...will look for the books.

Really like this strong painting Barbara. The modelling on the face and the dark eding to the side of the face and the neck and top of the dress makes it very dramatic and give a lot of impact.

That author will give you quite a story if you don't mind sitting on the edge of your chair, and worrying about what's going to happen until the end of the book. She is a great writer, funny, tragic, ultimately a fierce believer in love.

Thanks for reminding me -- I think I'll take a break and dig into my next one. Ha Ha (as you would say).

Thank you. The model exuded such a story, that it was a delight to paint her, and things happened that I couldn't have predicted. When I got home and photographed it I did think that perhaps you might like it. I'm glad you do. It's almost like the model painted it herself.

How great to have found an author that you love and who already has a body of work under her belt for you to work your way through.
Barbara, you have really captured the strength and determination on the face of your model. Her story has definitely infiltrated your painting.

Thank you so much. Yes knowing there are many books by an author you love is a definite plus!