Here's the big one! A consuming scene. 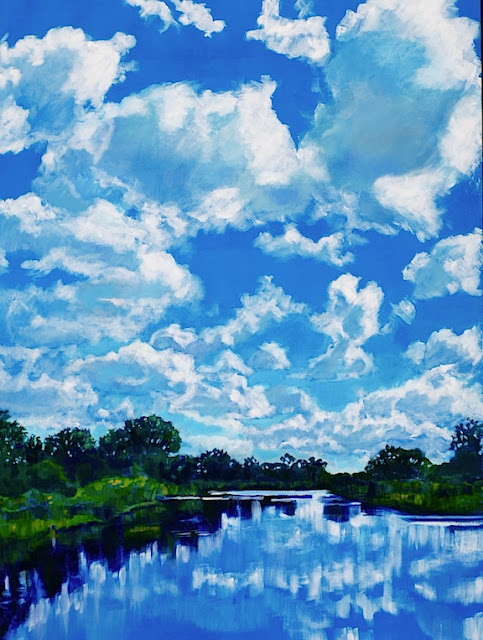 In the City
Acrylic on canvas
36 x 48 inches
Barbara Muir © 2016
My hat is off to Howard Wolinsky who has played a huge
part in my art career for the past decade.  He, after all
shot the You Tube interview videos about my Skype
art that got me on the Oprah Winfrey show, and the
Where In The Skype Are You? segment.

Last fall Howard posted a picture so beautiful, so
cloud-filled, so awesome beyond compare that I asked
if I might do a painting based on the photo.

Howard went to Pakistan and India, and I went to
Florence, Italy and Paris, France.  In the meantime
Howard lost the high res image, but very kindly sent
me an image so that I could begin the painting.

I decided to go large, and although the photo is not
accurate in terms of colour, and we may try and get a
better image later,  here is the painting I've been
working on, bowing down to Howard's talents
in so many directions (photography is one), and
grateful beyond compare.

I had so much fun painting this one.  I think it's done,
but it isn't in a show until Tuesday, so I can't
promise small changes won't occur.

Meanwhile if you want to see the piece in all its
astounding beauty go to the Super Wonder Gallery
876 Bloor Street West, Toronto, to the Scape show
opening on Friday January 29.

Have a loving-what-you-do day.
Posted by Barbara Muir at 2:57 PM

Oh. Wow. Barbara, astounding beauty is absolutely the right way to describe this!
I LOVE it! You really know how to do justice to clouds!
How lovely of your friend to give you the use of his photo. I am intrigued and will be looking him up online.
I hope you received my response to your lovely email.
XOXOXO

How can one not smile when viewing this piece?!
I first saw this painting yesterday, but was distracted with the interviews you mentioned in your post with Howard Wolinsky (no surprise you were fabulous)...thereby getting sucked into the YouTube galaxy.
So back to yesterday, cold & overcast yesterday, saw your painting and today - sunny and bright. coincidence? i think not.
; )
Thank you for sharing your world with us, Barbara!

Thank you so much. Yes I received your email, I've
been painting like crazy and I'm behind on the rest of
my life. I finished the book, and I admit I feel quite sad.
Next week I will have a space at some point to respond
properly, and with bells on.

Thank you so much. Howard is an amazing interviewer,
photographer and writer. I so love your painting
and feel my day brighten every time I see one of
your works. You rock!

It means a lot to me that you like it. You've got
me saving everything circular for some future
something. I am so inspired by your wonderful
work.

Love, Love your cloud paintings, my friend in the dot! Please do more!!.

Thank you, thank you, thank you David. I am doing more. Just
took a break to talk to you here for a minute. Please
keep the blog going. And we blogger blog people need to ask
Google to keep it open to the entire blog community.

Stay fabulous David.
Your fan in the T.dot,

Thank you so much Karen,

I wish I lived closer to you. I'd love to come to one of your
shows.

This is stunning Barbara! Really impressed how you captured the life force of those clouds. Hope your show starting tomorrow is a huge success.

Thanks so much. The show starts on Friday, the paintings are due tomorrow.
So... I know it's going to be a wonderful show because the paintings
I've seen in the invitations are beautiful. Clearly painters were inspired
by the idea of Landscapes in January.