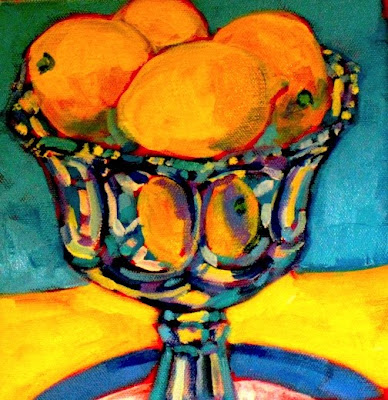 I love the shape of lemons, they are perfect somehow.
The colour is always joyous, and their curves are
compelling. I was so excited to land in California, my
first time in a long time in a southern climate and
to see lemons growing on trees!

My son taught me to put lemons out in bowls when
I'm looking for a centerpiece and don't have
flowers. (Where did he learn that?) But I've been
using them in conjunction with flowers for a few
years since he taught me to do so. That son arrived
home today from Vietnam, and the day has been a
wild swing of emotions. At the last minute I realized
he hadn't given me the flight, number or airline he
was flying on and he was in the air! Pearson airport
is huge, and I had no idea which of the vast terminal
buildings he'd land at. My friend helped
me think it through rationally this morning, and by
some perhaps intuitive logic I ended up at Terminal
1. Terminal 3, the other possibility is a complex
labyrinth of highways away from Terminal 1. So
this decision mattered.

I waited, and waited and phoned my husband, and
waited, and called my son's cell, and left a message
on my phone, and by some miracle after I'd even
had him paged at the other terminal, he arrived and
called my cell. He was on a totally different airline
than I'd imagined, and coming in from a different
city. But when I saw his face, I was so overcome with
joy that we'd somehow found each other despite
every possibility that we wouldn't.

But that wasn't it!!!! His luggage had been lost. We
just got home (a 45 minute drive) and he called to
learn it had been found, so we jumped back in the car
and drove back, heading into one of the worst storms
I've witnessed in southern Ontario. We just got into
the airport and were told to wait when the storm hit
with a fury. The lights in the huge building flickered,
the sky outside turned green. Then the people at
United said that the luggage had been sent to our house!
I am afraid of lightning. But this was no ordinary
thunder storm. I refused to leave the terminal, and
learned that tornadoes had hit north of the city, the
city of Toronto was under a tornado watch, and police
cars had been ordered off the road. I drove home
when it seemed the storm was calming down, and
gripped the wheel in terror the whole way.

Hey! We are all safe, dinner was excellent. We
laughed with both of our sons, and I did a little
painting of lemons to commemorate the day, and
celebrate having our family together.

Have a loving-life-and-lemons day.
Posted by Barbara Muir at 8:43 PM

What an adventure you all had!! I'm so glad all is well.

This painting is stunning. It looks as though the lovely lemons are symbolic of your family--safe, in a beautiful place, cozy and bright.

I LOVE this painting, Barbara!!!
It is so strong, vivid and full of joy - it seems as if your happiness about the good outcome of this adventure and about having your whole family together once again simply poured out of you onto the canvas. WOW!

It was an adventurous day with lots of dullish waiting. I almost cried when I saw my son's face. There he was in T-shirt, shorts and flip-flops. Tanned with a beard and had travelled half way around the world. It was a delight to know he was safe, grinning from ear to ear and walking towards me.

I started painting all the time on vacation. Now I feel strange if I can't settle down at least to a small canvas. I'm really glad you like the painting. I think it was the culmination of knowing so many things I was worried about had worked out just fine.

How great to have your son home (YAY!) and this is a beautiful bowl full of lemons too!!!! XOXO

Now my son's in Argentina for two weeks. He Skyped me from his hotel last night. I've seen my son more on Skype in the past year than in person. He's a sweetie though to think of me in the middle of yet another adventure. He's working with a very successful photographer.

Toronto Airport Limo is a good taxi service which help the US people a lot while they are in very hurry to reach their destination..Or sometimes to catch their plan quick.Airport Limos caters to all your special requests.Toronto Airport Limo mainly concentrates on the airport pick up and drop and they are considered to be experts as they are the masters of airport travel.I liked this site as this tells about the transportation fact of world..And if you guys want well qualities transportation to the airport you can have some sites like this one..Plan your trip anytime with Airport Limo.So,ready to let the good times roll and make sure that your journey is a safe one.
Regards,
Samy......