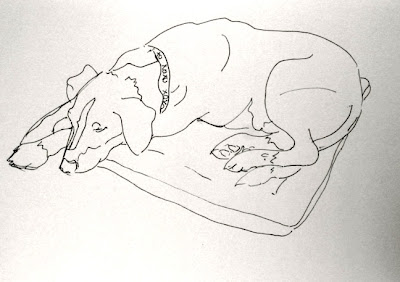 Love the dog on the mat
Black marker on bond paper
12 x 14 inches
Barbara Muir © 2011
I met a woman in my supermarket last weekend
who called herself a border collie.  She works
in customer service in a huge superstore, and
was alone in a booth with probably 100 bins
filled with returned merchandise, sorting it out.
I had bought a pair of shoes for $9.99 (down
from $69) and three pairs of glasses for $15 and
they would not ring through.  In about 15 seconds
the customer service expert rifled through the bins,
found similar items, rung them up, then smiled --
I was on my way. But she described herself as a
border collie, someone who likes to get people moving.

I think I'm my own border collie for art.  I run
around myself, herding myself until I get into
the studio.  I give myself a good hard stare in the
mirror if I am not at it for at least part of every
day.  My dog is part border collie so I've seen that
stare on her face many times.  When the cats snarl
at one another, she is on it immediately, returning
order - the Nana from Peter Pan in our house.

Who is the art border collie in your life?

Have a getting-that-art-person-into-the-studio day.
P.S.  I felt incredibly lucky after writing this to turn on
the radio in the studio and come across an Ideas
program on CBC all about how dogs think, called
Dogs Themselves. I don't think I'd agree with all of
their findings, but it was interesting, and to honour all of that I did
a drawing of Zoey, my dog.  She looks much
heftier here than she is in real life.  That girl is sleek.
Posted by Barbara Muir at 7:38 PM

Your line drawings are so good, Barbara. So confident; so perfectly pared down to the most important parts.

Thanks so much. I'm painting, but the project is not ready to be revealed.

Miss you too. So much.

I can only agrre with Nicki. Your drawings are sooo good!

Thanks so much. I love your paintings so much. Your ocean series leaves me lonely for the sea. I miss it.