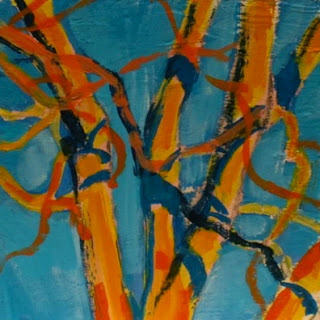 Acrylic on wood panel
5 x 5 inches
Barbara Muir © 2011
I don't usually write about things that disturb
me here, because I am trying to be positive
about life, and I do believe that staying
cheerful helps people produce art.

But today I cannot stand by and sanction the
lies and misinformation being
promulgated by some  of the Canadian media about
nuclear power.  People I've talked to since
the earthquake and subsequent tsunami in
Japan wreaked havoc with the Fukushima
nuclear power plant are under the false belief that
nuclear power is either clean (nothing could
be farther from the truth) or cheap (when
each nuclear reactor costs billions of dollars).
Mike Bullard on CFRB radio today said
that it would make more sense to leave
the lights on for Earth Hour tomorrow night
than to light candles, as nuclear power
produces no emissions, and is better
for the environment than candles. This is
a total lie.  Steven came in at this point to say
I should add that the environment is not just
the air (but please note the recent explosion in
Japan polluted the air with radioactive fall out),
but also the land and the water.

I was so disgusted by Bullard's abuse of
his job as a popular radio talk show host
to promote this terribly misleading idea. Yesterday
I was listening on the radio to a farmer in Japan living
near the Fukushima nuclear power plant in
Japan. This farmer has to leave his farm because
the vegetables he's growing are no longer
safe to eat because the soil is so radioactive.
He has to leave his farm and his cows.  He and
many people like him can no longer stay in
their homes or operate their farms, which are
their livelihood.

But most of the media I've listened to in
Canada is trying to minimize the danger
and talk about the benefits of nuclear power.
If you ever doubt that nuclear power has a huge
lobby pushing for its expansion just watch the
movie Silkwood, a true story about a woman
who tried to reveal the truth about nuclear power
in the United States, Karen Silkwood who was
killed for her bravery and outspoken convictions.

As only one fifth of Canadians read for pleasure
we are particularly vulnerable to false sound bite
information.  But even a little research would go
a long way to helping us understand that we should
make the elimination of nuclear power a focal point
of any politician's stated environmental goals.
Nuclear power is extremely dangerous, as the
Japanese, who are technologically among the most
advanced people in the world are sadly discovering.
What is worse is that the serious meltdown in Japan
could affect that whole region of the Pacific
at a minimum, and possibly fisheries on the west coast
of Canada and the U.S. too.  That isn't a temporary
effect, as the radioactivity lasts for thousands of years.

At the moment Greenpeace in Germany has rated
this accident as a level 7, or equivalent to Chernobyl.

Please turn off the lights tomorrow night, and
think about the people in Japan who have had their
homes and livelihood taken from them, first by
an earthquake and tsunami, and then by an even
worse irreparable man made tragedy -- the breakdown
of a nuclear power plant.  Here in Toronto I live 23
miles from a nuclear power plant in Pickering.
On March 14th the Pickering plant leaked 73,000
litres of demineralized water containing tritium into
Lake Ontario, the source for Toronto's drinking water.
Go to minute 2:26 of this story to get a clear comment
on the severity of this "incident."

• Nuclear power plants cost billions of dollars to
build.
• To date there is no safe way to store nuclear waste.
Nuclear waste has a radioactive half life of
10s of thousands of years, and is unsafe for human
beings for that length of time.

Please read up, and then ask your governments to
quit building nuclear reactors, and to mothball
existing nuclear power plants.  There are viable
alternatives, but we all have to work together
at insisting on their development and use.

Have a not-being-fooled-by-idiocy day.
P.S. On Wednesday night Stephen Colbert
discussed this idea on the Colbert Report in
the section called "The Word".  Check it
out on Comedy Central in the U.S. and The
Comedy Network in Canada.
Posted by Barbara Muir at 9:45 PM

Email ThisBlogThis!Share to TwitterShare to FacebookShare to Pinterest
Labels: nuclear power is unsafe. dangers in Japan growing. Japanese people are deprived of their homes and livelihood by nuclear accident.

Barbara, thanks for the excellent post. It needs to be talked about. I whole-heartedly agree with you. and I really think that people have to start talking about conservation as well! Perhaps we all use/consume too much. All new models of cars, appliances, homes etc. should be made using the most up-to-date energy efficiency standards. They KNOW how to make better things. Why not have everyone start practicing it? Argh. Anyway, good to read your words ; )

Excellent post Barbara, at the moment we have in Berlin a large protest march....

Right on Barbara! I love your message!

Thanks so much. It was encouraging to note that in Germany the people want an end to nuclear power altogether. And sad to hear that heightened radiation levels are being recorded off the coast of Newfoundland, attributed to the Japan explosion.

I listened to the news and heard that you are having the largest protest march against nuclear power that Germany has ever held. I find that so heartening. Maybe the German people can teach Canadians about how seriously they should be taking this situation in Japan, and that they should be demanding an end to this technology from their politicians.

Thanks so much. It matters that we pay attention to how the sound bites are going down and inoculating the public from the dangers of rational and ongoing thought.

Oh Barbara, where to start? Thank you for the heartfelt articulation of the anxieties and frustrations facing us. When I think all we consume--energy, food, water--it's truly overwhelming. Starting with a small personal act like turning off the lights, is a possible opening to taking action in a larger way!
Beautiful painting too--I love paintings of trees.

Thanks so much. I've just heard that another earthquake has hit northern Japan. The poor people there. It's just too much.

Let's focus on a Happy spring. I want to live in Linnyland all year round.