The MoMA, Monet, and Me 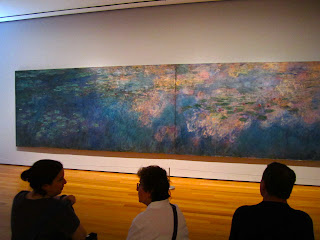 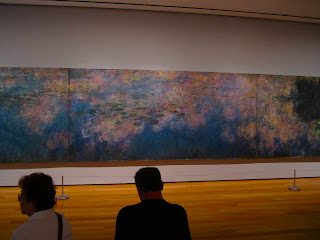 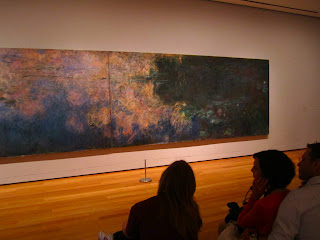 Three views of Claude Monet's Water Lilies 1814 - 1826
at the MoMA, New York City
Monet and I have a relationship even though we've
never met.  But we've met in paint -- the most
momentous time for me took place in Stuttgart
Germany at a major show of his work.  I visited Germany
tagging along with Steven on a business trip that took
us to England, Germany and Sweden over a two week
journey.  While Steven worked, I visited museums
and had experiences.  My encounter with Monet's
paintings was so profound that I couldn't even describe
it to Steven without crying.  I felt that Monet was in
the room in the museum as I studied his paintings of
poplars. Of course he wasn't really there, but his
painting spoke of his hand and where he had dragged
either a brush, or a cloth of a new colour along the
horizon. For a painter the language of paint is
almost as direct a language as speech. 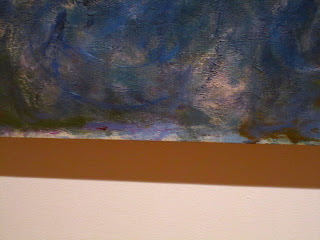 At the bottom edge of the triptych the canvas shows in places. 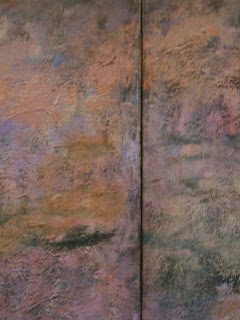 I was interested in what happens at the join
of the canvasses.  From afar the paintings read as one
large painting, not as three separate works.
Yesterday I had the same experience -- the
feeling of knowing the painter had been there at
the MoMA where Monet's Water Lilies is on
display.  It's a triptych, more than 40 feet wide.
How absolutely magnificent. I studied how Monet
joined the edges of the three pieces, and noticed that
he covered the upper edges of the work, but that the
canvas was bare in places at the bottom edges.  I felt
both moved and instructed.  Once again the presence
of the great Monet was with me.  These works are
remarkable, even if you know nothing about the
painter, but add to the equation the fact that Monet
worked on them until his death at 86 and you realize
how impressive it is that he was working on such a
huge scale.

My friend Flora Doehler's work reminds me a bit
of Monet, even though her work is completely
different.  What is similar is her use of texture, and
building colour in layers.  Plus she reveres nature
the way that Monet did.

Have a seeing-the-creativity-of-the-past-in-the-future day.
Posted by Barbara Muir at 10:25 PM

Email ThisBlogThis!Share to TwitterShare to FacebookShare to Pinterest
Labels: Monet at the MoMA, New York City.

What a fabulous post, Barbara! Thank you!
Coincidently I am on my way to Monet's garden in Giverny at the moment and you will be on my mind, Barbara. Also coincidently I painted the Stuttgarter Platz in Berlin yesterday ...

It is awe inspiring to stand and have the privilege of experiencing the 'artist in the room' in the situation that you are talking about. I have felt that same feeling on several occasions in front of great art. Lucky you to enjoy it this month. Cant wait to meet you on Tuesday. I will have some lunch on for us just after you arrive. And I will call Susan too because I know she'd love to see you too. Is this okay for you?

So breathtaking. Thank you for sharing this experience with us.

Thank you so much. Lucky you heading to Monet's garden at Giverny. I would so love to go there.

Yes isn't it a wonderful thing to feel the strength of an artist's presence in the work. I can't wait to meet you too.

I am loving your work each day. I feel sad that you must be half way through your month of paintings. I just love seeing them each day, and wondering what you'll paint today.