Some sketches for you 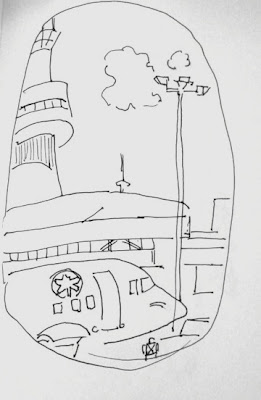 View out the window in Toronto
Black marker on bond paper
5 x 9 inches
Barbara Muir © 2011
(Forgive the quality of my
photos today.  The best
light is in the washroom, but even
there it is not that bright.)
We headed out for New York today.  I have a lingering
on-the-edge cold, so took the decongestants the
pharmacist prescribed, almost worked.  There
is a lot of waiting when you're flying.  Despite my
cold we were happy, and luxuriated in the time to sit,
to wait, to enjoy a coffee together.

I bought a Moleskin notebook and sketched until
my pen succumbed to the pressure on the plane,
and started leaving black blobs of liquid ink on the page.
I was inspired by all of you as I drew, but in particular
two people, David Xu, from the Don Valley Art
Club, who showed me his sketchbook when I
went to Studio Vogue for the Jeremy Lipking
video evening.  David's sketchbook deserves a
show all on its own.  His drawings are beautiful.
He paints in a formal high realism style, which
is greatly admired, but his many sketches done
travelling the subway in Toronto show a completely
different side of his art. 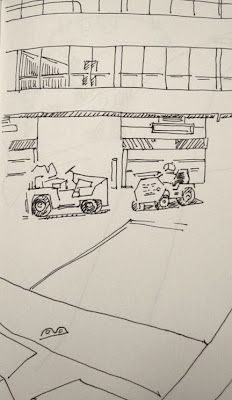 Runway tractors Pearson Airport Toronto
Black marker on bond paper
5 x 9 inches
Barbara Muir © 2011
Then I was thinking of Edward B. Gordon who says
he doesn't think about what, or who he's painting,
just shapes. 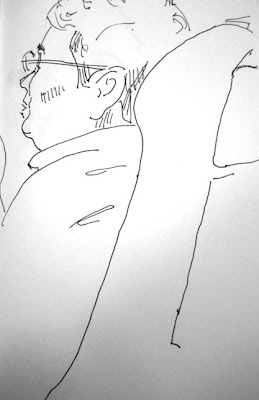 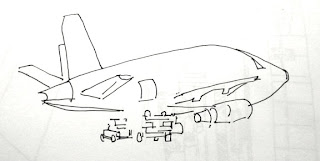 Unloading the plane
Black marker on bond paper
5 x 9 inches
Barbara Muir © 2011
I had a lot of fun until my pen resisted.  I took a different
pen to dinner, so there may be more sketches tomorrow.
So far we have had a super time.  Stuffed filet of sole for
dinner at a wonderful Spanish restaurant in Chelsea,
then we walked from Chelsea back to our hotel which
is near the park.  It's cool here, and the rain stopped
tonight, so it was magnificent at Time's Square
-- filled with people, all the stores open at midnight.
Such vibrant energy, we do love New York.

Have an enjoying-wherever-you-are day
Posted by Barbara Muir at 10:12 PM

Email ThisBlogThis!Share to TwitterShare to FacebookShare to Pinterest
Labels: sketches. airport and in flight. black marker on bond paper.

Now you are the sketch goddess, Barbara! Love these so much.

Thanks so much. I feel so energized here -- even though I have the cold of the century. There is such a charge everywhere. So much going on.

Wish you were here, but wouldn't want you to catch my cold.

Excellent sketches, especially with a leaky pen, cold meds and a stuffy nose. Yayy for art in airports and on planes. :)

You do such beautiful work on airplanes. I admit I only realized how much I'd want to draw at the airport, and a kind fellow in an airport store pointed me to the notebooks. Whew.