Art in the family 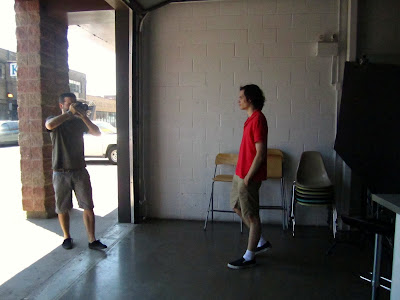 At the studio, Christopher takes set up shots of Sam to see what he's
working with.
Last weekend we had the pleasure of watching our sons
at work.  Art continues to flourish in the next generation.
My son Christopher is an amazing, award winning photographer.
And Sam is an acting student at the University of Windsor.
This year Sam needs head shots, so of course he went to
his brother. 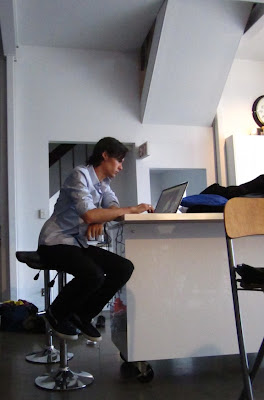 Sam chooses his images
I'm on the road now taking a bit of a holiday, and naturally
I miss my guys.  But today I'm showing you pictures from the photo
shoot.  A make up artist did Sam's make up and Christopher
helped him choose a wardrobe for the shots.  We have high
hopes that Sam (named after Sam Shepard) will have a
glorious career in acting, if that's what he wants to do.  Both
his brother and his cousin are into film, his cousin may even
show a film at TIFF (the Toronto International Film Festival)
next year. 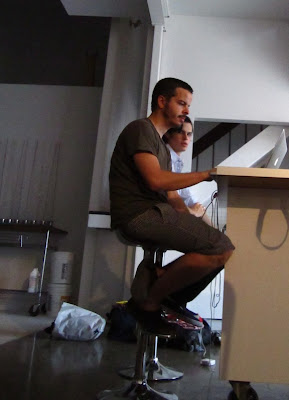 Christopher works with Sam to edit their choices.
After the shoot Sam went through his pictures, and then Christopher
and Sam picked the shots that will represent Sam in his final
year productions.  Pretty exciting for the Mom and Dad -- me
and Steven.

Have a being-delighted-with-your-family day.
Posted by Barbara Muir at 9:27 AM

That's interesting. Thank you for sharing, Barbara. They both look like handsome guys and I wish them all the success they can get! Unfortunately my sons would never allow me to post anything about them...

I don't think mine would mind. I hope not. I don't do so very often.

You must be bursting with pride and love when you see your boys work together and thrive in their own worlds.

I am very happy for you, Barbara, and wish you and your family every success.

Thank you for sharing this part of your good life.

It was nice to see them working together. We dropped Sam off, and then came back at the end of the session. Christopher is a real pro, and Sam is humble and a bit in awe of his brother. So it is fascinating to watch how totally different they are at the moment, and yet somehow so much alike too. Plus I just love the studio where C.J. works.