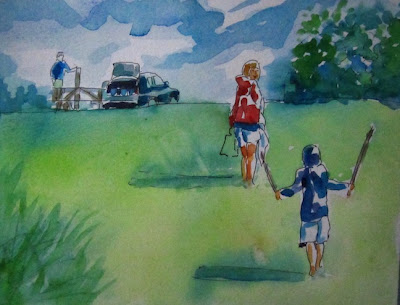 Heading Home with the light sabers
Watercolour on watercolour paper with black marker
9 x 12 inches
Barbara Muir © 2011
(After being on the beach this cute little
boy was still playing with the sticks
he called his light sabers.  I love
seeing brilliant imaginations at work.)
We do run into wildlife in the city – that’s why there’s
A radio on the garage full time and there has been for the
past month.  Once we spotted a coyote in the park,
and apparently coyotes have killed small dogs and cats
north of the city.  But citings of some animals are
rare indeed in Toronto.
In Ottawa my mother lives on the edge of the greenbelt and
is visited regularly by deer who eat whatever vegetables she
doesn’t manage to protect.  On the way
to Quebec City a deer ran out in front of our car, and
luckily we missed it.
Out here in Nova Scotia a huge black bear ran across the
road not too far from here.  But one of the creatures we
frequently have to cope with is the lowly bat.  You don’t want
to kill bats if they aren’t pestering you, which they don’t.
Because near the tidal river we live next to mosquitoes can be a
major nuisance in the summer and bats consider those insects
to be fine dining.  But discovering them inside the shutters
when we first arrive, or worse making themselves at home
in the ceiling above out bed – that is something we have to
handle each year when we first arrive.
As I write this a crow is telling me it’s a good day for the beach.
Have an enjoying the wildlife in your life day.
Posted by Barbara Muir at 11:39 AM

We used to experience that when we still lived in the country. One does kind of get used to it.
Your watercolour paintings are beautiful!

Thanks so much. I have limited internet access, so I hope to catch up with my comments when I get back home. Meanwhile you know that I love your work.

yikes bats inside is no fun, but i agree they are special little creatures, and need protecting. nice watercolour Barbara.

It's really not a big problem. More a funny one. They aren't flying around or anything -- and I do believe they're gone.