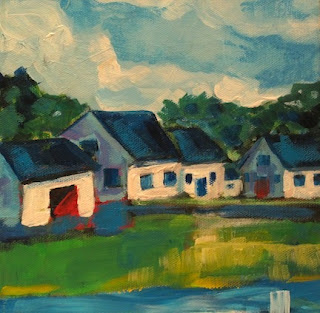 Dreaming of Maine
Acrylic on canvas
8 x 8 inches
Barbara Muir © 2012
Once again I've had a great day.  Not much time
to paint, but I had fun thinking about Maine and
parts of New Brunswick with this one, where you
come upon buildings that run into one another, and
go on and on because some new addition was needed,
and unlike our tiny city lots the room was there,
so Bob's your uncle, ipso facto, lets add another
section on.  Some of them are my favorite white
clapboard, and that's what I was thinking about
in this little dreamscape.

I met a friend I hadn't seen for a long time today,
and we had the greatest talk.  I am such a firm
believer in happiness and always enjoy
good conversation in a lovely setting.  I walked
away with a rich feeling of delight colouring
my day.

But by contrast it seems that so many people
I've talked to recently are leary of the idea
of happiness. They ask -- is happiness real?
Substitute possible, achievable, valuable?
Is this just winter acting on the collective
mood? Maybe it doesn't matter.  Apparently pessimists
are classically conservative, and optimists more liberal.
I have no idea whether or not this is true. I do
know that it feels infinitely better to think you're
happy, than to know that you're not.

Steven and I went out to Ikea, for our Thursday
night supper.  The people behind the counter
there recognize us because we've been following
this strange, predictable pattern for almost
two years.  We eat practically the same meals, and
sit where we can watch little children and families
playing.  Tonight a mother was spoon feeding supper
to her six year old girl, so that the child didn't have
to stop playing to eat.  Both the mother and child
were happy.  I think.  And we were happy watching
them.  I think.  We also seemed to be happy in
the car listening to a wildly funny radio show
and laughing our heads off.

Maybe it's those new vitamins Steven's been giving
me, because despite reasons for sorrow that are
always present, I have been feeling overwhelmingly
content.  Even happy.  Maybe you're the reason for
that, and you and you and you.  Thanks for that.
I think it's real. And if I'm living in some
Descartian/Augustinian duality for now I think
I'll chill, and say WooHoo! Today life is good.

Have a having-a-great-day day
Posted by Barbara Muir at 9:53 PM

Yes, happiness is real. Absolutely. But perhaps people can't recognize the happiness that they already have in their lives. Some are always striving for more and trying to achieve standards that were constructed for others, that can't really be achieved.

Perhaps our society is built upon the notion that happiness is always just around the corner, if only we purchased this... or achieved that...

I'm as big a consumer as the next person, so I'm not talking about that. But perhaps people should set more realistic life goals, and enjoy the life they already have.

Thanks Barbara for writing about happiness! I also believe that happiness is essential, without it we can't have a full life!

Maybe. I probably think about the subject more than I should -- trying to understand what makes other people and me tick. I do know that it's more fun to be happy, than not. But that doesn't mean it's at all easy for many people to find whatever the ticket is for getting and staying happy most of the time, given that the world is full of truly grave problems in addition to all of the wonders it provides. As artists we're probably incredibly lucky to live in a state of awe.

You can't always enjoy life if it's really hard. But even then I think some glimmer of joy can come from seeing a beautiful flower, or bird, or someone being kind to another person right out of the blue. Yesterday as I was walking along afraid of falling on an icy patch, a beautiful young woman, dressed to go to a meeting, carrying documents in her hand, fell right in front of me on the sidewalk. I picked up her papers, sympathized with her and she went on her way. She was smiling, and so was I. Perhaps that's all we need.

I guess what I am saying is that happiness is a choice -unless you are medically unable to be happy. The events of your life will happen anyways, but most people can choose to be content and at peace about themselves and the world. I keep my own blinkers on about the outside world, in a bit of a news blackout, and instead I seek out like minded individuals, both in person and online. My attitude might sound weird to you but the closest person in my life suffers from horrible depression - so I see myself as a beacon of hope and I try to stay happy enough for two.

I don't think you're weird. Part of my job both in painting and teaching is trying to figure out how to make people happy. How to help them discover what works in terms of happiness. I see the advancement of the notion of happiness as a possibility as a huge improvement over the atmosphere when I was a child. I actually was happy despite the odds to the contrary, but that was not a common viewpoint. At least now, no matter how corny and Pollyannish some people consider the pursuit to be, there are so many options to try to find self awareness and some kind of peace. I consider that to be a positive boon.

Beautiful painting, Barbara! Feeling all feelings makes feeling happiness even more of a happy feeling.(How's that for a Linnyism?)

Thank you so much. As in all feelings point to happiness. I suppose sometimes there's even a glimpse of happiness in sorrow, or a reveling in the deep quality of sorrow, especially when it's attached to love. But I do prefer the happiness of spirit I feel every time I go to Linnyland.