"The easy path is joy" 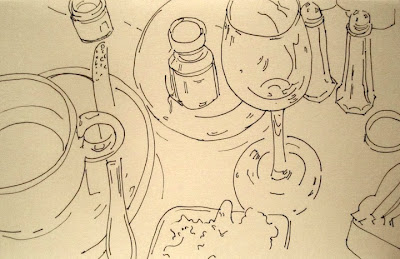 Hotel Breakfast concert
Black marker on Fabiano drawing paper
10 x 7 inches
Barbara Muir © 2012
(We did not eat breakfast in our room (one of
my favorite pleasures -- but had a delicious
breakfast the the hotel dining room with Sam,
looking out at the Detroit River and Detroit.)
I get these notes from The Secret  called The Secret Scrolls
that my friend Henriette in Norway told me about.
You can sign up for them here. Today's was very good.
To sum it up Rhonda Byrne says that being joyful takes
less energy than it takes to, "think negative thoughts, to
speak negative words, and to feel miserable."  I like this. 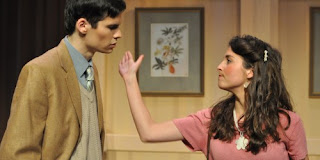 Sam as Guy (left) gets a slap from the character
Sam, his high school sweetheart, played by
Natasha Alexander, one of
the women he's hurt in the past.
The great irony of the play
for us is that in real life our Sam is the sweetest
person, and loyal to a fault.
We had a wonderful weekend this past weekend when
we took off for Windsor to see my son in his final play
at university.  He was the lead -- Guy -- in Some Girls,
by Neil LaBute, and he was wonderful.  The cast of four
women and Sam was exceptional. 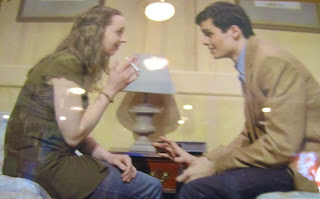 Sam (right) as Guy with the fun girl Tyler, played by
Elizabeth Guilbault, another
woman who Guy
treated badly in the past.  Guy
(Sam's character) travels around the U.S.
apologizing to past girlfriends.
Yesterday Sam had breakfast with us, then we took
him back for his next performance.  We walked along
the waterfront in Windsor, which was a super walk,
then drove the back roads up to London past acres of
greenhouses growing the tomatoes and vegetables for
the big Heinz factory in Leamington.  We bought
beautiful tomatoes from a road side vendor, and saw
so many charming farmhouses. I find it comforting that
there is still land saved for farming in our very populated
province.  In the background big windmills gave Steven
a delight -- he is a firm believer in wind energy.

I was in the mood for change -- so we had dinner in
a very pretty restaurant in London, Ontario  called
David's Bistro, and then drove back to Toronto. 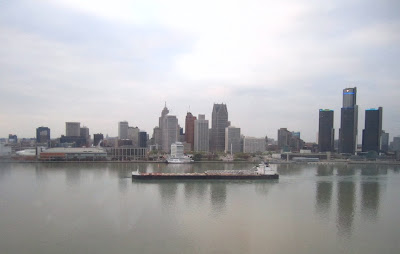 View of Detroit, Michigan from our hotel room in
Windsor, Ontario.  From Windsor, Detroit looks
like the city's downtown.  It's strange to think how
arbitrary our borders are.  You can hear Detroit's
traffic by the river.  It is so close.  When I was a little
girl living in Windsor, we regarded the two cities as
part of the same cultural experience.
It's been a day of hard work today, and after the long
drives Saturday and Sunday (five hours each way),
the memories of our happy times with Sam, and
our fun and laughter with each other make life seem
precious, and great.

Have a getting-out-to-see-the-world day.
Posted by Barbara Muir at 10:27 PM

Love this sketch! We're soon to be headed off on a trans-atlantic cruise, and I've been thinking about doing pieces of the table settings in between the meals. This is inspiring me!!

Oh, that's great! I mean every thing about this post is great. Your wonderful drawing (love it!!), your handsome, talented son and your description of the whole event.
How proud you must be! I keep my fingers crossed for Sam that he will be successful in his life after university, too. Such a hard profession but its always definitely worth living your dream! Hello from London, Liza

Thank you so much. The last few weeks have been insanely busy, so I'm way behind on responding. Love your work.

You are way too sweet. It was a really special weekend, but I have been working 24/7 ever since, with no time to breathe. Glad these good times keep me going. And the thought of you and your work, and exciting projects. Let's talk soon.

Thank you so much. I love your work. So wonderful.