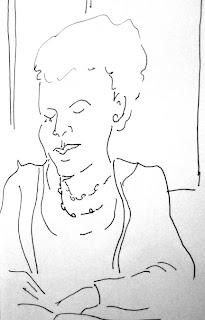 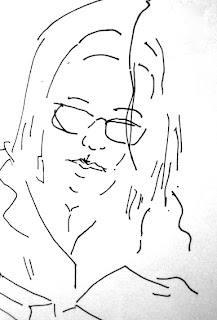 Yesterday we packed up the car and took the
long trip back down south to Windsor, Ontario.
Our son Sam was performing his final monologue,
based on the life of Jack Kevorkian.  Sam wrote
and acted out the monologue which was
powerfully sad. When Sam stayed at the
theatre to talk to his class afterwards we went for a long
walk by the Detroit river -- the two of us both shaken
up and disturbed by Sam's intense and moving
performance, and filled with pride for him. 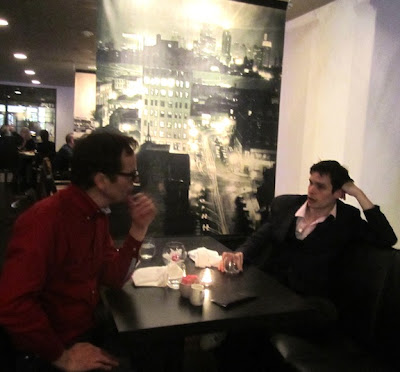 Steven and Sam talk about Sam's plans
at the City Grill Restaurant in Windsor.
Both of our sons took acting at the university of
Windsor, and like me spent four years in that
city.  Sam will be coming home at the end of
this term and launching out into the world.  This
trip I was moved by the thought of not returning
for some time.  I was born in Windsor, and left
when I was four.  I kept hearing the song
"My HomeTown" by Bruce Springsteen
playing in mymind while we were there.
I have vague memories of being a happy child
in Windsor, and now amazing, and poignant memories
of watching my children perform.

Today we visited the Art Gallery of Windsor with
Sam before heading home. I was grateful
to the docent, Lynn Newman who was engaging
and enlightening about the Mary Wrinch paintings
and prints on the third floor. A dynamic self portrait
by a woman painter I'd never heard of before -- Bobs
Cogill Haworth was magnificent. 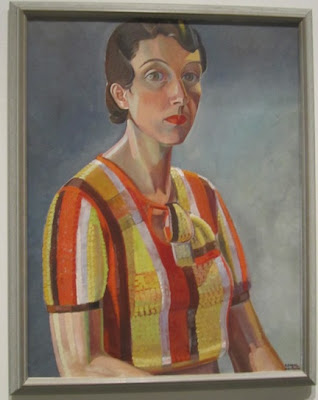 Sam, Steven and I walked through a door in the gallery
into one of the beautiful glass-walled rooms looking out
over the Detroit river. The space was set up for a tea the
next day, with different gorgeous china tea sets on each table. 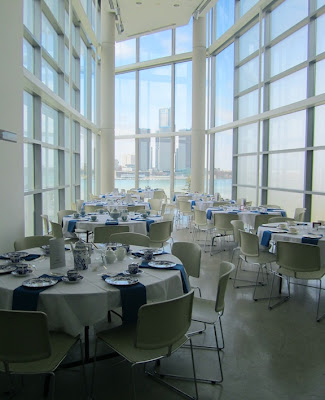 The glassed in space shaped like the prow of a ship
set up for a tea party. 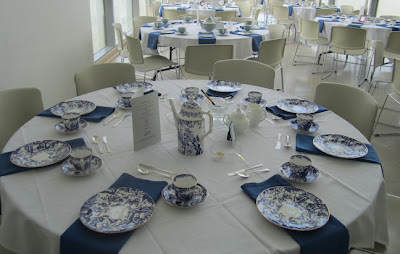 For a china freak like me this was a visual treat.
On the trip home we drove as far as London today
on country rodes passing by apple groves shimmering
with pink blooms in the sunshine.  The sight was one of
the most beautiful I have ever seen, and there seemed to be
about 20 miles of orchards on one side of the road,
while the glorious blues of Lake Erie attracted us
on the other side of the two lane highway. 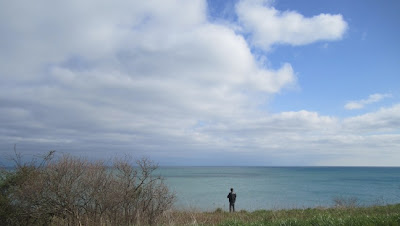 Steven looks out over Lake Erie
We drove down to Port Stanley to walk on the beach. Then
after trying to get dinner at three different restaurants with no
success we decided just to head home, and the cats were
glad we did.

I feel like I've been away for a week with so many
fascinating experiences.  Aside from Sam's impressive
work, the best part of the trip was travelling with
Steven enjoying the chance to listen to music or
hilarious talk radio, and to dream and plan together.

Have a enjoying-a-fabulous-trip day.
Posted by Barbara Muir at 11:23 PM

You must be very proud indeed! It would have been fabulous to see Sam deliver that monologue that he himself wrote!
Wonderful drawings too!
Love, Marcia

What a wonderful blog post Barbara. You must be so proud of your Sam. It sounds like it was a riveting performance…and such a tough subject too.
Thanks for the photo of the china overlooking Detroit. It gave me a second-hand thrill to see it.
And your description of the blossoms is tantalizing as well. Our apple trees are just today starting to show green. The Forsythia are blooming, and daffodils, but the tulips aren't quite there yet.
I can't believe it's spring….again!!!
I will miss your whirlwind trips to Windsor too.
xoox

I felt as though I was on the trip with you, Barbara. You've written an excellent post about some very important events.

It's really wonderful that you were able to visit Windsor and your talented son, along with your husband. What a time you had.

Love all the photos. Thank you for sharing the painting and you beautiful drawings, too. I'd never heard of the artist either. Sigh.

I enjoyed this post so much. You wrote about the array of emotions so well. It sounds like both a wonderfully melancholy and uplifting journey.

It was pretty exciting. But you know that feeling -- having such a talented daughter. I was moved beyond measure. Thanks so much.

Thanks so much. It was a great trip.
I just loved Sam's performance. Plus I love seeing all the wide open spaces, windmills and farmland on the trip. A real pleasure.

Thanks so much. I will miss these university visits. Everything is promise and excitement. So wonderful. I thought of you when I wrote about Bobs Cogill. The painting was so powerful, and brave. And she was a woman, and is unknown -- not right.

The hard thing about Sam's monologue was the subject matter, and the fact that one of my friends has one of the terrible diseases he acted out. But I was so proud of him -- he is an amazing actor, and it turns out a powerful writer too. That was exciting, and it was so much having supper and breakfast with him, and letting him show us around Windsor, which he feels is now his town too.

that should read "so much fun having supper..."etc.