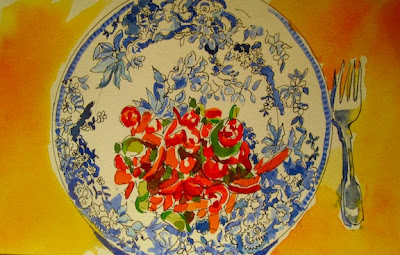 Salad Days
Watercolour and black marker
on Arches watercolour paper
6 x 10 inches
Barbara Muir © 2012
(I'm going through a salad phase --
not eating it (I do that
every day), but wanting to draw and
paint the wonder of salad. Okay
I am crazy -- crazy for
salad, and my son Sam made an
awesome one tonight.)

Going through my draft posts I found this one that I wrote
last year.  I liked the thought.  Frequently people who
are in good health, young (enough) and fit tell me that
they're too old to do (fill in the blank with a long cherished
dream).  Last year thinking about that I decided to look
back on where I was five years ago.  Now of course
the information is about six years ago, but I can add to that.

Where were you  five years ago?  I'd been to Europe
for the first time in years, and enjoyed the art
and culture in Warwick, England, Stuttgart, Germany
and Stockholm, Sweden.  I was painting, and
appearing in a few shows a year. I had one child still
in High School, and a small art community that I
loved.  And I had no idea that you were out there
waiting.

You know how we worry about what will happen.
These worries are often in vain.  Since that very
happy year, so much has happened in my art career.

And the main reason is this.  Starting and keeping
going with the blog. 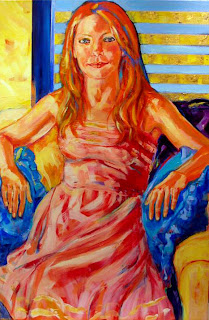 Today I look back on 2007, which is five years ago.
In May 2007 I took a photo of a  portrait I did of a
beautiful young woman named Lucy.  I am glad to
see that for me that work done 5 years ago still holds
up.  When I read the writing of Mike Dooley from
Tut.com, whose work I enjoy so much, he always
says, "let go of the hows." I tell my students --
too old?  Look at me I'm having the best time I
have ever had."  What's happened since 2007
-- plenty.  I've written 1300 blog posts.  Just that is
something. I started the blog in 2008 in February.
It was a cold, hard February.

That very year I broke my leg, and convalescing
in front of my computer met some blog friends
who I have known ever since.  You know that in 2009
I was on the Oprah Winfrey show, and I exhibited my
work at the Florence Biennale. In 2010 I showed my work
in New York City for the first time, and have now
exhibited there three years in a row.  I have been on TV
shows.  My life has been charged.

But for me the most amazing thing has been meeting all
of you.  It's wonderful knowing I have friends in many parts
of the planet, and caring about people in Tucson,
and Colorado, Texas and New York, Boston and Chicago,
Victoria, B.C. and London, England, Ireland and Germany,
Australia and Italy.  You can't tell me that that hasn't expanded
my joy in life in hundreds, if not thousands of ways.

Where were you five years ago?  Do you look back
and marvel?  I love some of the work I was doing then, and
honour it, plus I delight in how my ideas have been
transformed and fueled by you and your often daily
thoughts and work.

Thank you.  I am really grateful for the four + years
we've spent together.

Have a -relishing-the-present-day.
Posted by Barbara Muir at 8:32 PM

Enjoyed reading your post summing up your past 5 years. I also love the contrasts of the blue/orange on this salad painting. Lovely painting too of the portait of Lucy. i hadn't seen that one before. Reflecting on your accomplishments are many happy moments. You've come a long way baby!

Thanks so much. Meeting you has been one of the great pleasures of my blogging life. I love your work, your blog and your gallery. Your paintings are so lovely. Thank you -- we've all come a long way together.

Hey Barbara, your sald painting is terrific. I love your still lifes and florals. Five years ago? I was worrying too much about the punters (potential market)..now it's much better but funnily enough having a good old clear out yesterday I came across some life drawings I did only 2 years ago and realised how much I had learned in that space of time. Yes, life is good to us, despite all the pressures.

Thank you for sharing a part of your life with us, Barbara. You've always got something interesting and fun going on and I'm always in awe of your beautiful work and dedication.

The time has passed quickly, don't you think?

May you have many more hours in your studio and many hours to share with us.

I have so loved your work since I first encountered it with the landscapes, but we see our own work differently. Thanks so much for your kind comments and wonderful drawings and paintings.
So glad to have found you through this crazy medium.

Yes the time has sailed by. Perhaps that's the constant rush phenomenon.
I saw a fellow I know in the supermarket yesterday, and he said he was just trying to catch up. I thought I don't know if that ever happens. And I don't think that's a bad thing. As we rush around we imagine this Zen-like peace that would come from having nothing at all to do. But I see that the people who really don't have to work or are not required to get something done are not happier.

So -- deep breath and moving forward as you say.