Listening to Yoko and painting flowers 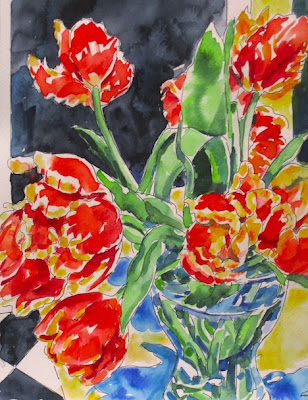 The night of the tulips
Watercolour and marker
on watercolour paper
9 x 12 inches
Barbara Muir © 2013
Eleanor Wachtel is interviewing Yoko Ono tonight
on Wachtel on the Arts on CBC Radio. Eleanor is
such a super interviewer and the music
she's playing by Yoko Ono sounds quite cheerful.
Yoko's story is a rough one.  She lost John Lennon,
her third husband, the famous Beatle in 1980.
And Ono also lived through her second husband's
abduction of her daughter, Kyoko in 1971, and lost contact
with her daughter until 1994. And yet she sounds
happy, exuberant.

Ono is quite inspiring -- so alive and young sounding
at 80.  In a way she's like Lucian Freud, the artist
I'm reading about this week. Freud was still working
on several paintings per day in his 80s.  Yoko is so
electric and alive in what most people would consider
very old age.  She's just put out a new album, and has a
major retrospective exhibit on -- the Half-A-Wind Show,
that opened in Frankfurt, Germany in February.

Yoko says to Eleanor, "Think about it, we [women]
created the human race." True, Yoko, but I think it's
lucky that we didn't have to create it alone.  Yoko's point
is that if you've ever witnessed a woman giving birth,
risking her own life in the process, you know that women
aren't weak.  But I think artists (men and women) are
brave because we create worlds of our own -- in
fact that is our daily work.

You might enjoy the interview.  I did.  Here's the
painting I started while I was listening.  I thought it
would make a nice break from my self-portraits.
At this point those could only become even more
disturbing.  Let's give the antibiotics a couple of days!

Have an enjoying-learning-about-other-artists day.
Posted by Barbara Muir at 10:35 PM

Email ThisBlogThis!Share to TwitterShare to FacebookShare to Pinterest
Labels: Still Life. The night of the tulips. watercolor and marker. Barbara Muir © 2013. Toronto. Canad

I think this is done, don't you, the sparkly tulips of the night.
I'm glad you can listen to Eleanor Wachtel interview Yoko Ono and take some respite from a hacking cough which obviously isn't getting the better of you while you find inspiration, beauty and merriment in the glory of these flowers intermingled with Yoko Ono's fascinating story - some of which I heard second hand from David who said that Yoko, like many children who've been raised by servants - apparently found their servants more interesting than her wealthy parents but now I'm hooked - I'll have to follow the link and listen for myself.

Barbara! You have to get better! You poor thing. I hope the meds kick in and you feel better asap. And it's a lovely painting ; )

Yes apparently one of Yoko's favorite sounds she makes in her music is a delicate version of the moans a woman makes in labour. That was a sound she overheard while visiting the servants' quarters. She also said her mother wasn't a physically warm person. No wonder she enjoyed John, who seemed to be wrapped around her in every photograph. It was a great interview. Freud (don't worry I'm almost finished the book), took relief from portraits in other things like his garden. I like the fact that he considered every painting to be a portrait -- even when the subject was inanimate -- like eggs! I certainly do not have my normal energy, but will welcome it big time when it's back.

Me too. The meds have helped with the terrifying cough. I don't think I've ever had such a deep cough. I'm glad you like the painting. I do love yours.

It's especially hard to believe when you listen to her in the interview. She sounds like a girl. She has a very young voice. I love your work.

Being a teenager in 1969, I went to the airport to see John arrive for his Bed-in in Montreal. (I was living there at the time). I've never gotten over the fact that Yoko took John away from the Beatles ;). I am joking of course, but its amazing how these things stay with us over the years. I may be open minded enough now to give her another chance.
Your tulips are lovely, the red and yellow pop with the black background. I nice break from portraits. Your previous post image is priceless. Feel better!

Hi Catherine lucky you to have seen John. I think it would be hard for Yoko to, "take John away from the Beatles." A lot of people think that I'm sure. It mustn't have been easy being John's wife. Give Yoko a chance. She's pretty cool I think.

I'm glad you like the tulips. I have been loving your scenes of Toronto. You do light on water at night so magically.