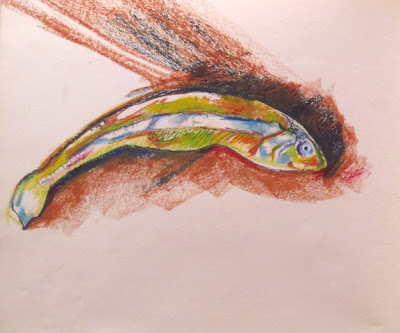 My brother's fish
oil pastel on bond paper
11 x 14 inches
Barbara Muir ©
As promised I am back in my old sketchbook
which is taking me down memory lane.  It's
bizarre in a way to remember your crazy youth
when you're a long married, happy wife with
two lovely grown children, and a wonderful
daughter-in-law, a dog and two cats.

But before all that life was pretty wild.  This
fish is a case in point.  For a while before my
brother became a writer, he was an artist in Toronto
with various hyper-imaginative, inventive ideas.
One of them was plasticized fish pins.  He took
enormous health risks making them -- dipping tiny,
pre-dried fish that came in a bag into clear plastic resin,
and then drying the glossy result on a cookie sheet.
He then glued pin backs on them and sold those
lifelike fish pins at fashion accessory counters
in major department stores, including
The Bay. And the fishy pins even made their way
to high fashion outlets in Paris, France.

In our early days together Steven and I had so
much fun with my brother, and we still do every time
we visit with him and his wife, Lina, in Ottawa.
He is funny and creative -- turning his talents to
writing for the most part now. But who could
forget the hundreds of plexiglass women he
baked in his oven for a combination sculpture and
slide show, conceptual art piece showcased at a
huge nightclub in the capital city? My little fish
drawing is a compliment to him.  Andrew Muir,
my bro, is the height of cool.

Have a recognizing-clever-art day.
P.S.  A friend tells me those dried fish were usually
used for soup, or pasta sauce

Nice to hear about the dipped fish! funny too. I like your portrait from art class, good that you make time in your hectic life to paint first and foremost. you are so good at it.

I hope you got away today in the crazy weather. Snow on April 11th, that's a first in my memory.

Painting matters. You are an incredibly wonderful painter.