So many wonderful artists! -- more from the Florence Biennale

It's a week and half since I landed back in Toronto
after a very good flight across the wide Atlantic,
and my thoughts are still revolving around the
wonderful artists I met at the Florence Biennale.

As an artist for the most part working in intense
colour, I was surprised at how attracted I was to
the work of artists working in black and white and
grey scale at the Florence Biennale. 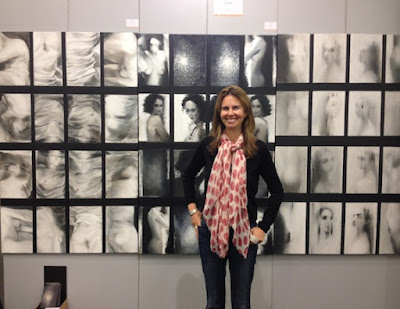 Square 1
Oil on canvas
Alegria, 2015
(We were just about to take the shot
for the Happy People project and
we got called away!  Alegria pointed out
that her name means happiness!)

This work Square 1, a triptych, consisting of 16
panels each, by Ecuador's Alegria is one of the black
and white works I admired. It explores her thoughts
about the way women have to hide to be safe. Her
paintings were inspired by her daughter's 16th birthday.
Alegria isworried about what her daughter will face out
in the world as an adult woman. 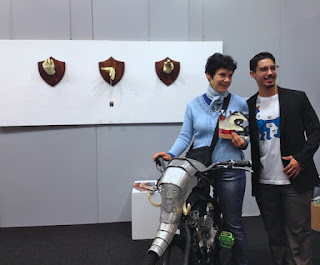 Rafael Cardona-Acevedo
Untitled sculptures
Various materials
2015
(Rafael was another artist we hoped to photograph
as part of the Happy People Project on the final day,
but he didn't have any free time.  Here he
is with a guest, I'm not sure who.)

I'm sorry I don't have a better photo of Puerto Rico's
Rafael Cardona-Acevedo's witty sculptures.  Rafael's
buoyant good mood, cheery smile, and positive
attitude were a treat for all the artists exhibiting near
his work.  His wooden crests with hands playing
with Yoyos, is a wonderful work, and and his bike
as an elephant, is also brilliant. 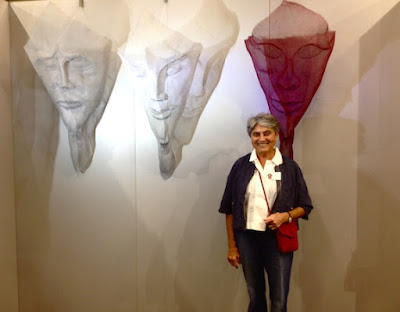 Kaya Deckelbaum with En'light
Hand manipulated, coloured wire mesh
2015
(Kaya would also have been part of
the Happy People Project, but
there was no time to photograph
her on the final day because there
were so many visitors.)
New York's Kaya Deckelbaum creates dramatic and
evocative sculptures of faces using wire mesh, which
she tints, and then lights so that the faces also create
shadow shapes on the wall behind them.  We did
not get to do the happy people exercise with her,
but she is very happy.  And she did win an award for
her work, En'light. Her sons and her husband helped
her out at the Biennale, and her family is understandably
proud of her work. Kaya won a prize in sculpture. 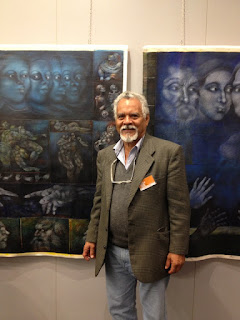 Alvaro Gómez with Querencias (close up)
Mixed media on canvas
2015 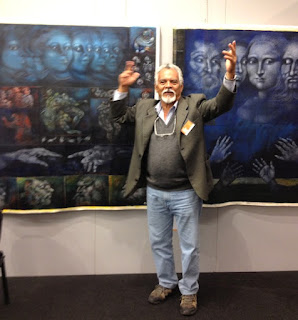 Alvaro Gómez hands in the air happy
Alvaro Gómez from Venezula displayed two large
panels, featuring beautiful, classical drawings in
coloured pencil on black canvas.  His images play
off some of the iconic paintings of the Renaissance
in an homage to Florence, the heart of that
art movement.  Those paintings and sculptures
continue to move viewers to voyage, as Alvaro did,
across the planet, just to see them.  Alvaro did the
Happy People move, and he also won a prize
in mixed media! 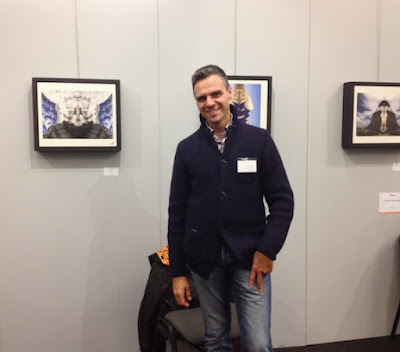 Stefano Favaretto debates the Happy People idea
in front of his beautiful photos on marble. 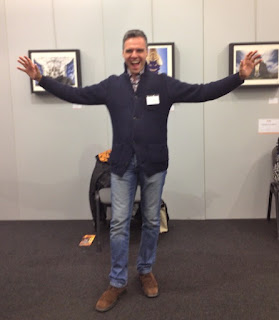 Stefano goes for happy.
Stefano Favaretto comes from northern Italy,
and I was surprised to learn that he worked
in Canada, I believe in Calgary as a family
therapist.  His lush photographs, printed on
marble, were a hit with everyone visiting
the Biennale.  His technique involves duplicating
the photo, like a Rorschach image, that reveals
a face, or character in the process.  He has
exhibited in Milan, Shanghai and New York City.
When the Biennale was over he was shipping
photos on slate to a show in Singapore.

Miranda Brouwers and I are hoping to continue
the Happy People project and expand its borders.
If you feel like belonging to this cheerful group,
email me a photo of you with your hands in the air,
and a big smile either at an art show displaying your
work, or in your studio.
Posted by Barbara Muir at 1:00 PM

And thank you for all the lovely photos and bits about the artists. You are a very wonderful person.
Hope you are feeling well-rested again by now :)

What a great time you had!! And you spread JOY whoever you go! Happy hands!! Xoxo

wonderful post Barbara! Obviously you have had a fabulous time away at the Biennelle in Florence, and I'm so happy that you did! So much enrichment in something like that. thanks for posting images of the variety of artists work, it's nice to see what you got to enjoy.
Happy painting this week.
xo

A wonderful and uplifting post Barbara! What amazing memories you have brought home with you! It is very generous of you to showcase all the other wonderful artists' works that you shared the exhibition with.
I hope you are settling back into normal life after the thrill of Firenze!

Thank you so much. Time to get back at it for sure.
I've been thinking of you, because I so
admire your super work, and your drive and energy.
Need some of that.

I certainly experienced joy at the Biennale. Such a wonderful
group of artists and I am very lucky that some of
those positive, talented people will remain friends over
the vast distances that separate us. Like we have eh!

Thank you. You so rock!

Thank you so much. I wish I'd used my camera more often,
but my phone was always handy. Now I can do some
stories about the trip, Florence and Paris. What
a treat! Hope you are well.

I wish I could have showcased all of the artists. I only talked about
people I'd met and talked to during the show. There were 400
artists! But yes, I am settling back into my home, and trying
to get painting again.