Canada is going to be in the World Cup 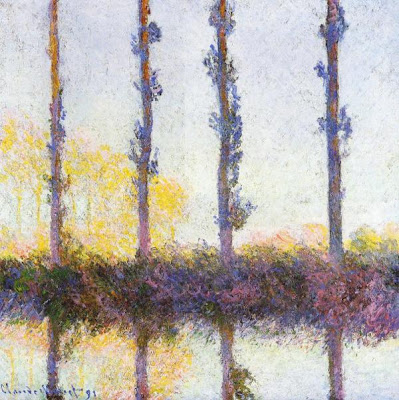 Four Trees
Claude Monet
Oil on canvas
1891
The Metropolitan Museum of Art,
New York City
(The paintings at the
Staatsgalerie were similar. I remember
crying telling Steven about them, and
how thick the paint was, and how Monet
went back as many as 60 times to
get the mood and lighting right!)
How do I know? Not from watching the soccer game today, and I didn't
know it was on between Jamaica and Canada.  But I was downtown
with Steven, trying to get across to the waterfront, and the scene was
insane.  We thought it was a walking version of the truckers that
held a protest in Ottawa that cost that city $36 million -- there
were so many Canadian flags.  But it was the soccer game, and we
were stuck in our car on one street in total standstill for 3/4 of an hour.

Valiant Steven still took me to the lake through endless tight traffic
-- not where we wanted to go. So I saw water, and it was very cold.
But it reminded me of when we were in Germany in 2006 during the
World Cup. So I think I will quote myself from an earlier piece.

"Toronto is a soccer town and as the World Cup begins inSouth Africa (This was in 2010) cars are appearing with flags of
their favourite countries out the window. In the grocery store peoplepick up the dinner groceries wearing soccer T-shirts. Soccer means a lot
to me for sentimental reasons even though I've never seen a pro game.When my oldest was born it was a World Cup year, andthe shouts and boos in our neighbourhood as the gamesprogressed were both disturbing and seemingly appropriate(especially the cheers) to a young mother. Someone gavemy son his first soccer T-shirt for a team unrelated toeither of his parents' heritage.In 2006 Steven and I were in Germany during the WorldCup, in Stuttgart where some of the games were played.It was wildly exciting. We didn't have tickets to the games,but the energy in the city was wonderful. There weresoccer balls worked into flower gardens, on the planethe butter and the chocolates were in the shape of soccerballs. People from all over the world gathered there infantastic costumes and face paint in their nationalcolours. We bought our sons the orange T-shirts of theDutch team when we moved on to Sweden. InStockholm one of the main streets was decoratedwith ribbons high above the traffic with all the flags ofthe countries in the World Cup.I saw first hand how excited everyone can get about soccer,and what an air of camaraderie surrounds the games.

Now where is this taking us in terms of art. When Iwas in Stuttgart, I left the glory of the World Cup outside,the shouts and cheers, people carrying aroundfoot and a half tall glasses of beer on the street, thecafés whose patios looked like giant parking lots of fansin front of huge TVs, even the silly humour on TVin the hotel room, with Reality show people playingsoccer blindfolded, to see the most wonderful showof Monet's poplars at the gorgeous Staatsgalerie.At the time I noticed that on each of the paintingsdisplayed in the gallery Monet had applied verythick paint, but during the process, perhaps at theend had rubbed the paint on the horizon, frequentlywith a completely different colour from the restof the piece with his hand or a cloth, and I couldfeel the action of Monet painting. I will alwaysassociate my profound feeling of being in theartist's immediate presence, of his genius in thathorizontal blurred line across his canvasses withsoccer. Call it synesthesia. And I will always associateChristopher's birth with the game.We can expect a wild city, (If Canada wins) especially in
the coffee bars on St. Clair just south of us during the games,and I'm looking forward to the hubbub. My sonscheer for The Netherlands because their father's parentswere Dutch, I have no favourite, but would cheer forItaly if I did. I just love the excitement."

Have a getting ready to win day.

Yeah 🇨🇦 Canada 😄
I love the tree paintings. It must have been amazing to get up so close to see the brush work!

I remember crying about it when I went back to the hotel to talk to
Steven about it that night. I was so moved. The museum in Stuttgart was one
of the most beautiful I'd been in. So amazing. And I could feel Monet
in the gallery as I was looking at his pieces. Now we have
a kitten who is a direct descendent (lol), and I get to let Monet the painter
know every day how much I love his work. Our Monet is a girl though.

We are fans of Ted Lasso. Hoping for another season. It is
taken seriously here by the fans of the game.