Family of Four -- make that seven

My sons are both home. Christopher had a long, long
wait at the baggage ramp tonight. But it was so
exciting to see him every time the doors opened.
At one point an older man, who was a minister out
of the collar, told me we could just walk through,
so I did, but naturally we were stopped by security.
Christopher, who has grown a beard, which I guess
makes him look suspicious, was searched by security
three times in the 15 hour trip home from Seoul
Korea, to Toronto. Boy it was nice to hug him, and
to drive home with all 4 of us in the car. At home Zoey,
Timbah and Fiona were very excited to see Christopher too. 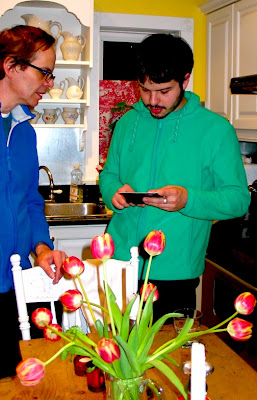 Christopher showing Steven his
passport -- In less than a year
he's been to the U.S.,
England, Korea, Thailand and
Taiwan. Not bad!

Thanks for your good wishes everyone. A friend at
school said we were going to have crowded nest
syndrome, and if that's what we've got I'm happy
we've got it. I'm going to go and watch the footage
of Obama's visit to Canada. I think he socked it to
Harper, our prime minister about the environmental
provisions of NAFTA.

After a day of teaching and a long wait at the airport,
I'm too tired for art tonight. I hope you are
painting wildly.

Have a welcoming-your-family-and-friends day.
Posted by Barbara Muir at 8:44 PM

Email ThisBlogThis!Share to TwitterShare to FacebookShare to Pinterest
Labels: The boy is home. Missing Megan. Goodbye to Korea.

Have a wonderful time with all your gorgeous men!! I'm guessing that you are smiling from ear to ear and hearing lots of stories!
Lucky you!!! xoxo

You are so right! I am smiling from ear to ear and working on a little painting of you! Have to talk on Skype again soon!!!!!

I'm so happy you have all your ducklings under your loving wing right now. Sending hugs...