The art versus math debate

Remember the experiments we all had to study in
psychology 101, so grim that they made most of us drop out and take
up -- acting, accounting or even...painting. It
seemed like countless numbers of Rhesus monkeys
were deprived of their mothers and raised by
either cloth or wire mesh surrogates. A radio
program the other night brought it back to me.
The behavioural psychologists discovered again and
again and again that the babies were more social
if they were raised on cloth (soft fuzzy), than
wire mesh, and oddly enough much better at
socializing when raised by their own mothers.

After listening to part of a program about the important
findings of that old research I made the link between
the tragedy of the many monkeys used in that research and
the way that government institutions like schools treat
children in our "civilized societies." I have a friend who's a
public school teacher, trained in art, who can't teach
art anymore, because 'the school (in a poor area) doesn't
have the resources or time to maintain an art program.'

The Rhesus monkeys raised on metal became
violent. Children schooled without
opportunities for expression develop, low
self-esteem, a fear of creativity, and an
inability to believe that art is important.

Turns out creativity is a huge determinant in
the vitality of an economy and the safety of cities.
Richard Florida who wrote Who's Your City says
that cities rich in art activities are the most economically
and socially viable, and also the most tolerant.
Guess where he picked to live? Toronto. But
the current government and the world economic
situation could affect future generations in this
vibrant town, because education in the arts in
general is taking a back seat to what the general
public believes creates jobs -- science and math.
When in fact studies show that art and music classes
improve performance in the sciences and math. 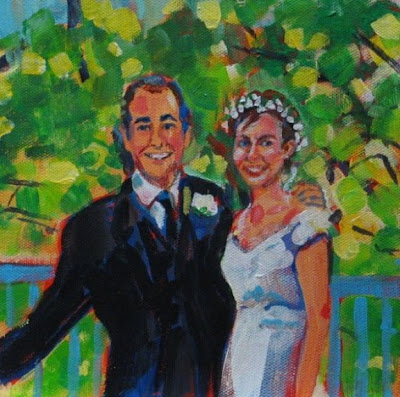 On a lighter note here's a little
painting I've been working on tonight.
My battery was dying so I'll take another shot
of it tomorrow.
It's not quite finished but almost.
Someone said that he'd seen
crocuses in his garden,
and it snowed today.
But the crocuses made me think of
spring and weddings.

Melinda of Melinda's Moments of Clarity says that"art and
beauty will save the world." http://melinda-momentsofclarity.blogspot.com/
It's time we artists spread the word.

Have a helping a non-artist-friend-like-art day.
Posted by Barbara Muir at 8:48 PM

Email ThisBlogThis!Share to TwitterShare to FacebookShare to Pinterest
Labels: kids without art education are as deprived. caught in a sick social experiment.

I'm in total agreement with you, Barbara. We are now experiencing the "pay me later" portion of "pay me now or..." as our governments and culture think, erroneously, that art is optional.

I love the painting you've posted. It is such an optimistic portrait of the human condition ever reaching toward hope and a better day.

Yes, I can honestly say that art has saved my life on many levels! I know you feel the same way.

This makes me so angry.

False choice, anyone? I've learned math in art class, and seen art taught in math class. You don't even need to separate the topics, much less choose between them.

Your extremely pertinent points about psychological development are well taken. There is another aspect, too: Art is culture (knowledge that is passed on from generation to generation, that isn't provided by genetics). The society that forgoes art is no longer a society, it is a collection of individuals: without shared knowledge, there is no society.

I know that the increasing levels of
discontentment young people feel cycles around lack. Lack of money and food is an emergency no question -- but I'm glad that you agree that so is the lack of opportunities for expression.

Wow! In many ways -- so many ways -- art has saved my life too.
Glad you like the painting. It needs work, but today I worked on something else.

Richard Florida has prompted the provincial government to look at how to move forward in what he calls "The Creative Age." But while they're studying it a whole school full of grade seven and eights, next to a high school where lock downs and violent incidents are a regular occurance has a principal unwilling to fight for the art program.

Oddly enough those of us who believe in art, are hoping that Barack Obama's stated interest in keeping arts and culture alive, will
affect Canadian governments too, and
arts education will soon be re-instated and valued for all children.