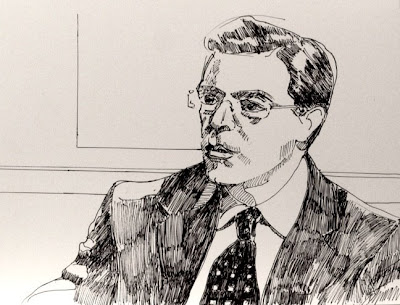 Drawing of a man
8 x 10 inches
black marker on watercolour paper
Barbara Muir © 2009
(not finished)
Sometimes I think I'm a split personality. I'm not -- but
there's part of me who's a sleeper. This me lives in a
temperate climate year round -- maybe Bermuda, no,
maybe England, and pretty much reads novels, drinks coffee,
and tea, eats my good friend Paula McIver in Nova
Scotia's blueberry and strawberry scones, (flown in for
that purpose every time Paula makes a batch) and when push
comes to shove walks her dog along a sandy beach, and
then feeling virtuous (because of the exercise) goes
back to her book.

The other me -- who seems to be the "real" me, except
when I'm sleeping, and even then, is always on the run.
On the run and trying to catch up. She is a list maker,
with a list that keeps growing, like something in a well
done animated movie, growing, and growing, and ...
well you get the point. She has so many days in a row
of that rushed feeling, that she really needs that other
laid back me to come in and save her from time to time.
Just not now. It's like that sad feeling you get when you're
raising little children, and working too much. They
come to the door, and pop their adorable, longing
faces in, and you have to say "later sweetie,
I just have to get this one thing done." The other
me is that sweet kid. And I am telling her later.
Tonight we ate dinner on the back porch, a little
chilly, but lovely salmon, rice and salad. For
that brief half hour, I was both mes. Two for one.

Don't call a shrink. You don't fool me for a minute.
You know exactly what I'm talking about and then
some.

I worked on a large commission today, but the photo
just plain did not work, and then I kept working.
So I thought I'd show you a drawing I did today,
also not finished, but I think I'll do another one.

Have a-letting-the-little-kid-in-for-a-minute day.
Posted by Barbara Muir at 7:47 PM

Love this post! I know exactly what you mean about being "other" selves. I have finally come into a peaceful existence with all 4 of mine.

Very nice drawing! "That man" looks a WHOLE lot like the love of my life, Stephen Colbert. Stay away from my boyfriend! ;P

I did not know that Stephen was your boyfriend. But in any case this "man" cannot possibly be him -- can he?

Days of clarity it seems to me follow a good sleep, not always possible when you're excited out of your trees.

It seems today I've actually had enough sleep to have a head on my shoulders. A comforting condition.

Second, I DO know exactly what you're talking about; you could have written it about me (And we may still have to call in a shrink).

Lastly, that 'real me' is working on an answer to your yesterday's question...but "later sweetie, after I just get this one thing done."

It is fun when both "mes" are present and accounted for! Oh, yes, I do so know what you are talking about. Great drawing - you are so good with that black pen!!!! XOXO

LOVE this drawing. And so love your writing!
You're lucky to have the reunion of noggin and shoulders. I've had "find brain" on my list a long time now.

I'm delighted that you like the drawing. And you do understand the later sweetie phenomenon. I thought
so with more than one blog, detailed and lovely work, and such intensive
explanations of how to do things for all of us luddites.

The pen does come in handy, when the
paintbrush is in the middle of something big, and not resolved enough to display. Here's to the good old pen.

Thanks for your kind encouragement.
You're pretty fabulous with the paint
I find.
XOXOXBarbara

I think our brains only weigh about three pounds, which does make them
hard to find. I should put that on my list. But I know it's right under the skull, because I urge my students not to bungie jump, because it hurts that thing -- G force of a car accident. In my brain the two halves are in concert on occasion. Very happy days result. I think sleep is a huge factor.

Stop whirring brain, and sleep.
That's on my list.