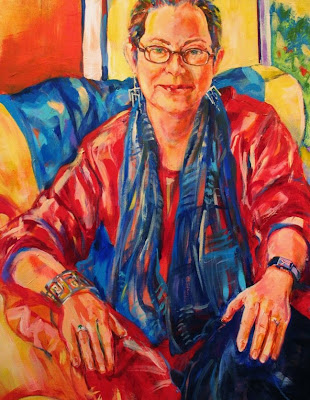 Catherine Scott
acrylic on canvas
24 x 36 inches
Barbara Muir © 2009
Frequently I've heard debates about whether nostalgia has a
place in art. In my experience, it plays a big role in portrait
painting. People who think about the possible longevity of
their painting want to know that some favorite object or
piece of jewelry is in the painting, so that at least for the
moment they will be "known." When I was taking English
Literature we studied the iconography of the fifteenth and
sixteenth centuries. Renaissance paintings were thick with symbols
that were associated with religious belief, purity, evil,
saintliness. But paintings of people today are not that
different. 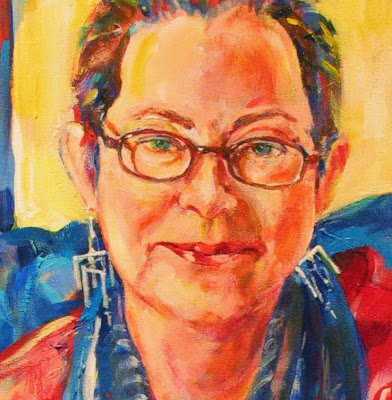 Detail from the portrait of
Catherine Scott showing her favorite earrings
Not being a high realist, I worry a bit when people want
a tiny ring, or thin bracelet depicted accurately. In my
style of work that ring might just be a flash of light -- from
any distance at all -- say the distance from me at my easel
to you sitting for me -- the details of that meaningful
object might be blurred -- lost. But that isn't even the point.
The point is that the sitter knows her mother's ring,
his father's watch, the tie a boy was given to wear when
he graduated is there, however loosely depicted. 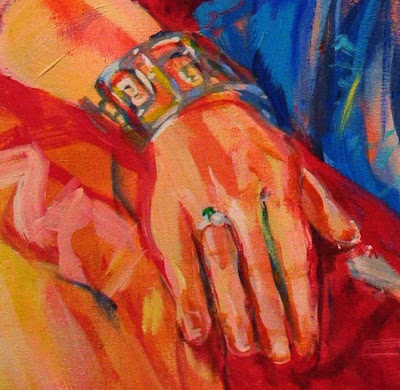 I have included my animals in paintings whenever
possible. This gives my heart a lurch when the animal
dies -- but you know what -- it's a joyous thing too --
because there is that personality captured in gesture
and love, in a way a photo in it's perfect, accurate
detail can't convey.

Have an enjoying-the-benefits-of-nostalgia day.
Posted by Barbara Muir at 9:55 AM

Email ThisBlogThis!Share to TwitterShare to FacebookShare to Pinterest
Labels: giving in to nostalgia. symbolism. art.

Barbara, Lovely colors in this painting. I never thought about nostalgia in a portrait but depicting those personal items, such as jewelry or a pet, is such a nice and long lasting touch.

Yes, people are very particular about what should be included in a portrait. Interesting things happen. I've painted a very sad person as happy, and now that person is happily in love. Paint it seems has power.

Another beautiful Portrait! Your palette is so full of bright energy and your style so recognizable as a "Barbara Muir" original. Great job!

Love the title and your observations on nostalgia. Those personal items tell the story of that individual and say so much long after they are gone.

I wish there had been a thoughtful painted portrait of my father. I can
see him clearly in my mind's eye, but don't know what he would have been
sentimental about. So a really good portrait would have solved that mystery. Thanks for your kind compliments. I did this a few years ago, and it remains one of my favorite paintings. I think it was because Catherine was a magnificent subject, brainy, warm and very kind.

A wonderful portrait, Barbara!
Like what you wrote with it, too - interesting food for thought - I should perhaps integrate that into my portraits sometime. It is nice to see the deatils close up - so well painted!
Years ago I painted my parents from a small black and white photograph and still enjoy looking at it in memory of my father. He died a long time ago - I was only eighteen, and I was very fond of him!

I'm glad you like this portrait. Yes,
it matters what people want to have in their portrait. You are such a great portrait painter, I'm glad you painted your father.

Eighteen is far too young to lose your father. I'm sorry that happened. But the love lives on, and even more so in a painting.

I love how these pieces tell us something about Catherine Scott. They add so much character AND celebrate her past. Love it. XXOXO

Yes the pieces do tell us that Catherine wanted to honour her mother, and liked modern jewellry for
herself. She wanted to wear strong, simple pieces in her painting, and favoured silver.

Love the paintings you did on your painting trip.