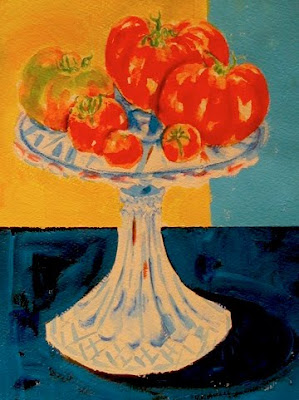 Tomatoes grown by children
watercolour, watercolour crayon,
and acrylic on watercolour paper
8 1/2 x 11 inches
Barbara Muir © 2010
(This is the one I worked on tonight) 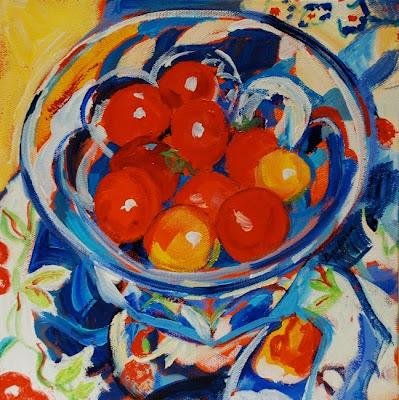 Children's garden tomatoes in a glass bowl
acrylic on canvas
12 x 12 inches
Barbara Muir © 2010
(This is the one I did a few years later.
much more verve and style). It is sold.

I took a course seven years ago now with Skip Lawrence
and Toph Schink in California. I think it changed my
life, but I didn't know it then. I was just rattled by their
ideas, and worried about my own. Don't get me wrong
I was crazy about those guys, they were great teachers,
and thinkers. They were funny, kind and soooo
talented.

Of course what they taught me sunk in. But only bit
by bit. And if they saw the piece of work I am posting
tonight they'd question that. But here's what they said
that I found hard to take at the time, "You're not a
watercolourist, a colourist, an acrylic painter, or a
drafts person, you're an artist and the most important
thing is what you make, not how you make it!" I
think 15 watercolour people in that class probably
fainted dead away after that idea, and even though
I'd moved on to acrylics, I would never, and I mean
never think of combining those different media.

They were opposed to the use of white, and I was
a floater -- sit an object on a white space. They
were so radical for me at the time, that I hardly
painted for two months. I just despaired. But of
course, being a painter, I emerged much stronger
than before I'd met them.

Going through my art drawers I found a sad little
watercolour of tomatoes. I recognized the cake plate
they sat on, because I've painted it many times,
but I didn't recognize the work as mine. I think it
was a vestige of my life right before that course.
Tonight I took a go at it. I know it still doesn't
work. It would be best to start over, or just to
forget it. But I learned a lot from trying to beef
its pale surface up (no pun intended those are
not beefsteak tomatoes). Those are organic vintage
tomatoes grown by a group of school children in
a park near me.

The second painting is one I did a few years
later of the same subject, and you can probably
see what I learned.

But here's what I did to the one I worked on
today. I darkened the tomatoes and the glass work
with watercolour crayon acrylic and watercolour,
I painted the "table" the glass plate sits on with
black acrylic. I divided the background and painted
in the blue and the yellow. I painted the area that
should be the table with two or three blues.

For now that's it. The painting doesn't have enough
zip for me to continue, but it taught me a lot about
what I've learned and I'm grateful to everyone who's
given me formal lessons, and who has taught me
informally by just posting their work on the net.
Thanks bloggers.

Have a noticing-what-you've-learned day.
Posted by Barbara Muir at 9:29 PM

Hi Barbara, it's amazing to see the difference between these two paintings. The more recent one has such a punch, the composition is so dynamic and it just makes a confident statement. I think you could work on the older one even more as it is beginning to look good but as you say, you have proved your point to yourself.

I'm glad you kept going. I think our teachers mean well and sometimes the kick they give goes deep, but ultimately helps us to produce better work.

It's important that you have your own voice and no one else's! I see lots of energy and skill in both of these.

It is amazing isn't it. Not that I don't fall back into less vivid frequently. But the true voice comes from exuberance I think, and when I hit it I feel super. Thanks for your kind comment. I love your work.

One of my favorite things that Skip Lawrence did was take watercolour tubes and squeeze the paint right onto the paper. This left the "resist and lots of white paper" people gasping. I think I was one of them (plus watercolour paint costs so much here). Now I get it.

I've learned a lot from superb painters like you. I love what you do with paint.

So great to see the contrast and growth between these two. Tells me to "keep going". The composition in the latest one is so beautifully dynamic and well balanced. You have blossomed into a modern day Gauguin!

It isn't a straight line. Thank you so much for saying so, but I am happy and inventive some days, and not at all on others. Those free flowing days are so great aren't they?

Hi Barbara, this is interesting and, as the others have said, the difference between the older and the more recent painting is so evident! I really like the second one - it has a lot of depth and punch. How right you are about the days when it just seems to flow - such happiness!!

Forgot to say that I am very sorry for replying this late!