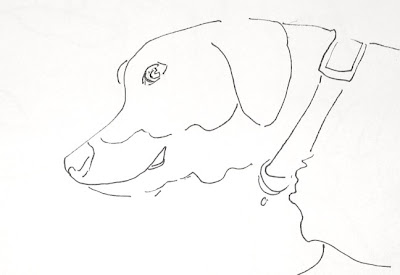 Zoey trying to sleep
black marker on bond paper
10 x 14 inches
Barbara Muir © 2010
(All of the animals love to lie
in front of the kitchen heat vent.
The cats make Zoey move by licking her
face or her back, which makes her
twitchy, so she has to be on guard.) 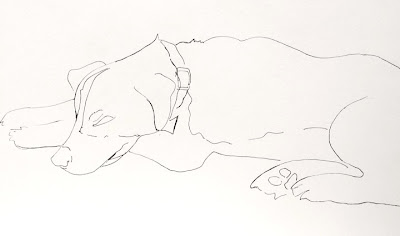 I couldn't go to my art class tonight, because I have too much
marking to do, and I need to catch up, but I didn't feel that
hard done by. Zoey and I walked in the late day light,
which turned the trees from brilliant yellow, to rose then
a deep rust while we played a few games of toss the ball
onto the wet, muddy grass in the park.

I talked to an artist friend in Texas on Skype, and another
artist friend phoned me from Holland. Then just as I was
settling down to mark I received this fantastic design for
a new hybrid car, being promoted by a Canadian company,
Ingo. I was so blown away to think that a person right
across the street in my little neighbourhood, Davide
Tonizzo was coming up with designs that could revolutionize
how we get around. When I was assured that the car would
be extremely comfortable to drive, I made it clear that I want one.
But first the company needs backers. Anyone?

Ah well you have to dream big. Back to my work marking and
painting. I am working on the background of the mother
and baby. I'm not too sure which way that's going to go.
Tonight I'm testing out a water theme. But all that could
change before the next time I look at the piece.

The painting is moving at such a slow pace, that I'll
wait a few days before I show you what I've done.
Instead tonight I'm showing you two sketches I
did of Zoey lying on the floor after a walk. She's
hard to draw because even when she's sleeping
she changes position constantly, but I love her
lines. 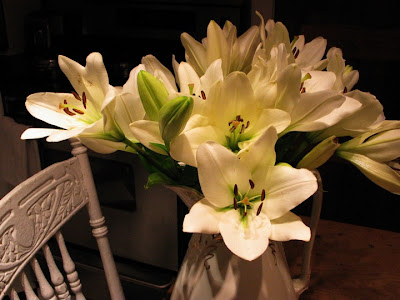 Lilies in the kitchen
I've been working so hard that
I hadn't taken these lilies out of
the paper until tonight. When I'd
freed them of the plastic, and
arranged them, I stood back in awe.
Aren't they beautiful!
I had to share this picture with you.

Have a Happy St. Patrick's Day!
Posted by Barbara Muir at 7:24 PM

Happy St. Patrick's Day to you. Love the line drawings. Always do.

Wonderful, fluid line drawings ... and great lilies--I think they are my favorite flower, so open and strong!

your drawings have such great line quality...reminds me a bit of Grandma Elizabeth Layton. ery nice