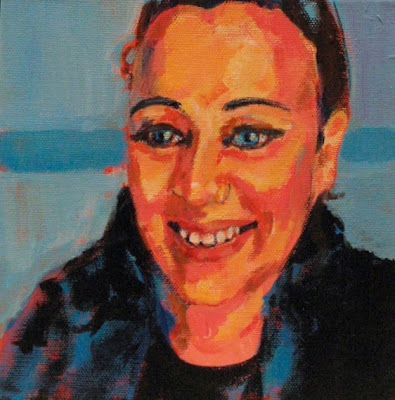 Portrait of an artist
Skype painting
acrylic on canvas
8 x 8 inches
Barbara Muir © 2010
( This is not quite done. But
it underscores what I meant
about instant. I've worked
on this, and done several
drawings of my friend
Tamara who lives in
Holland. Each image is
almost right. But it sometimes
takes me a number of tries to
get every feature right.
I put the Ottawa River behind
her in honour of my
father's birthday yesterday.

The other day listening to Elizabeth Gilbert's book
Committed coming home from a delicious, grabbed,
mall chicken dinner (my night to cook after a
long day at school) in Steven's car, I was so
deeply moved that I had to sit still so Steven wouldn't
notice and be worried about me. It was a shock as
emotion often is. Gilbert was talking about intimacy,
about lying in bed with her beloved Felipe and
asking him to tell her stories based on a word. He
was describing fishing trips with his father, and
lying on his back in their bed acting out his father's
powerful swimming stroke, and I had a completely
vivid image of my father swimming.

She said that watching Felipe she felt like she could
hear his father, whom she'd never met swimming,
and listening I could hear my father swimming too.

When I was 13 my parents moved to Toronto -- a
move that was terribly rocky for me, and probably
for my brothers too. We had been very happy in
Ottawa, and were heartbroken to leave our friends,
our schools, and our neighbourhood. My father
was already in the city, and my mother told us that
she knew we'd be happy when we saw the house.

The house in a suburb was a real beauty -- the most
gorgeous house I've ever lived in -- far more
spectacular -- even designed than the tiny semi
where we are currently very happy. But the big
draw -- the one she was confident would make
all the difference was the pool.

It was beautiful, and of course after a few years in
high school we had adjusted. But no sooner had
we settled in and I was in university, than my
father lost his job, and after a few months of what
must have been terrifying instability with two children
in university and one about to finish high school,
my father got another job in Ottawa.

I am rambling so forgive me. All of this is leading
back to colour, and a stunning revelation I had
listening to Gilbert's book. My parents moved back
to Ottawa when I was in university, and my mother
still lives in that house on the Ottawa river. It had
almost nothing to recommend it as houses go, although
it's still more spacious and elegant than my little house
here, but it had a gorgeous view of the Ottawa river,
and... a pool. David Hockney has immortalized the
beauty of swimming pools better than anyone.

But to actually swim in one, to have it as the summer
focal point of a family's life is a different thing.
Late in my father's life my sister and I took the train
to Ottawa, with my son Christopher on our knees.
I can still remember my father standing hip deep in
the pool, swishing his hands back and forth
in the glorious turquoise water, the golden light from
the late day sun sparkling on the water and his
tanned skin, and listening to him talking about the
significant moments in his life -- giving that gift to
me and my sister -- maybe fully aware that he didn't
have many years left. And I can see him swimming
after this rare moment of intimacy, doing the breast
stroke -- his tanned face and elegant thick white
hair above the water, and the sound of his breathing
as he completed his laps of the small, kidney shaped
pool. I'm certain my love of the colour turquoise
started right then.

Have an honouring-your-memories day.
Posted by Barbara Muir at 5:13 PM

Thank you for sharing such an intimate story, Barbara. How interesting to be able to trace a "color memory" to a particular place and time and special person. It's not surprising that a color you love and return to again and again is one which has such emotion attached to it.

I'm reading "Committed" right now and enjoying it as I did "Eat, Pray, Love". How wonderful to have such happy memories of your father. And a big congratulations on Canada's Golden win over USA in that exciting hockey game.

What a beautiful portrait . All 3 of your portraits of Tamara are wonderful and each so different from the other.

Thank you for sharing that moving story about your father. I got misty eyed reading it. Your insights into your emotional feeling toward turquoise is so interesting. It is wonderful that you were able to make that connection. Whenever I see it in your paintings it will evoke a warm feeling at the memory of this beautiful story.

Thank you for appreciating it. I could see the sunlight dancing off the turquoise in our pool and it transported me. These are lucky memories.

Thanks so much. You are great.

We listen to the book in the car, and I haven't heard most of it. She's a bit obsessive about every decision, and uses the word moreover way too much, but when she hits it, her writing is beautiful beyond compare, and I love her voice.

Thanks for your congratulations. I felt sorry for the U.S. For a non-sporty person, the Olympics were surprisingly engaging.

You are a sweetheart. It's funny but that colour turns a lot of people off. They prefer Weimeraner dog beige. But that doesn't deter me. The beige phenomenon is huge here in Canada. It is the new/old forever definition of elegance. But it reminds me a bit of military office mint green. After a while the charm loses its lustre and becomes commonplace.

So I am more than delighted that you like the colour, and that your
paintings are filled with colour and joy.

Barbara, this is a fantastic portrait!!!!! I think, it's my favourite so far. It is sooo alive and sparkling - it's wonderful!!!
And - I think you should definitely write a book one of these days. Thank you for a lovely post!