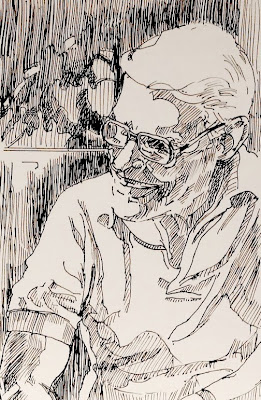 Portrait of my father
black marker on bond paper
7 x 9 inches
Barbara Muir 2010
(I'm happy for my father that
the Canadians won Olympic Gold
in Hockey tonight. He was a
major hockey fan, and would
have been shouting out instructions
and gesticulating wildly as he
watched the game today. He
would have loved that we won
the Gold on his birthday.
Here he is sitting in his favorite
chair, outside in his favorite
place his home with a view
on the Ottawa River.)
While I think of it last night we saw a great film
Morgan Freeman and Matt Damon in Invictus.
What an amazing movie. The election of
Barack Obama was a significant moment in
history, and so were the fantastic events in
this movie about Nelson Mandela and
South Africa. At school I look out at a sea
of faces from places all over the world, and it
breaks my heart to think that people would
actively dislike another person -- anyone in
that room -- because of the colour of their skin.
What a stupid bunch of people we have been
all over the world in that regard. The movie
tackled this theme in a respectful, kind and
moving way.

It is my father's birthday. It feels like he's been
dead a long time. The world has changed so
much since he left it. I miss him, and would
love to be able to bring him into my classroom
and introduce him to my students. I think he
would be proud of me and how I work, and
I know he would be delighted that I am doing
so much painting, something he loved to do
himself. Happy Birthday Father wherever
you are.

Have a-giving-your-neighbour-a-hug day.
Posted by Barbara Muir at 5:44 PM

Go Canada!!! We cheered when we heard.

I'd like to think that your father is beaming about this win from somewhere happy and safe. I'll bet that if he ever gets a glimpse of you and your work, he grins from ear to ear.

Haven't seen Invictus, but now will look forward to seeing it.

Great news for you and Canada! Your portrait of your father is fantastic. I do love how you vary your lines!

Your father would be SOOOOOOOOO proud of you. He would love the woman you are: creative, supportive, loving, interesting, thoughtful, kind... and an incredible teacher and artist. This is a wonderful drawing, too. Happy Birthday to your Dad! XOXOXO

This is possibly my favorite sketch of yours to date. You did your dad proud. Happy birthday to him and happy memories to you.

P.S. I loved Invictus, too. Morgan Freeman was born to play Nelson Mandela. One of my favorite parts was when the rugby team went to teach the kids how to play. Very powerful.

Love the fine detailed lines in this. I can tell it was drawn with a lot of love!

Beautiful drawing of a handsome and kind looking man. He would definitely be very proud of you, Barbara!Your post is very touching and makes me think of my father, whom I also loved dearly.