A long day's journey to our boy 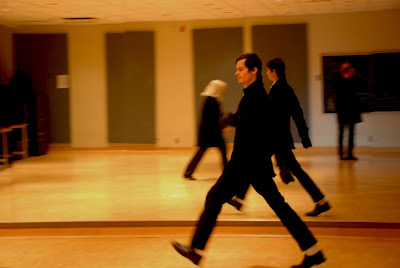 Sam and I fool around practicing silly walks, while
Steven snaps a photo.

We spent ten hours in the car today driving to
Windsor, Ontario and back to see Sam. We
brought him three boxes of groceries, and stuffed
his tiny residence room with food, then took him out
to lunch. We went for a bit of a drive to see
where I lived as a child (I spent my first four
years in Windsor), and then took him to his
rehearsal. 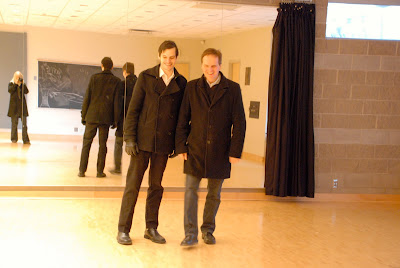 Sam teaching Steven some of his steps.

When we arrived the girl who is his rehearsal partner
for a Commedia dell'Arte scene hadn't arrived,
so Sam practiced his funny walk. Steven
and I joined in and played in the beautiful
voice room at Jackman Hall at the University
of Windsor. We took these goofy, blurry photos
which I love, then tore ourselves away for the long
drive home. 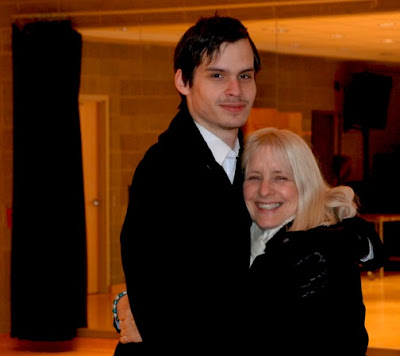 Sam and me. I always hate to say goodbye. 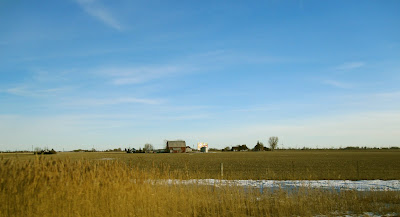 The drive away from Windsor -- vast views of farmland.

I used to dread reaching the flat land that stretches
for miles between Windsor and London. Now I
love it -- the vast expanse of it, which I can't
record properly with the camera. 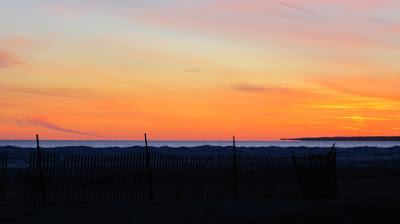 We walked on the frozen beach at Port Stanley,
grabbed dinner, then sang the rest of the way
home. 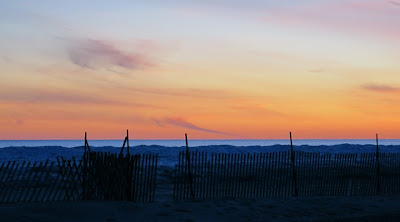 Another view of the beach at sunset. That's
winter fencing and frozen waves. But we
still walked in sand.

Have a having-fun-with-your-family day.
Posted by Barbara Muir at 7:31 PM

Barbara, those are wonderful photos! They show hte warmth of your family. I can't believe how 'manly' Sam looks now...his face has changed so much. Wow, does he ever look like Steven.
Those sunset shots are gorgeous too...they remind me of your paintings. Life imitates art.
While you were driving there, we were having lunch in Mahone Bay at a pub looking out at the frozen bay. It made the chowder even more tasty.
love, Flora xoox

Your photos are spectacular, setting the right mood for a good bye from your boy.

Beautiful photos Barbara; you son is a very good-looking fellow--love those eyes: tall, dark and handsome!
Sounds like a perfect day.

What fun photos! These are just great. Very artsy too.

It does sound like a spectacular day. I'm so glad you had time with your handsome young man. I know just how you feel...

Thank you so much. He really doesn't look like Steven except that his hair and eyes are dark. He is all his own look. I would love to paint what we saw yesterday. It would probably be best in watercolour or pastel.

Thanks so much. Sam is happy and well. We had a nice visit with him,
way too short, but he is at least as busy as we are.

Thanks so much. Sam is a handsome fellow -- tall, dark and handsome, and on top of that a really kind, sweet person.

I know that you do know how I feel. It is strange how quickly our lives change from the constant care for a teenager, to the infrequent bits of mothering we do when we visit. At the same time it's so exciting to see how your child is growing and changing, to see him changing into an adult. Such a sweet young man.

Lovely photos, Barbara! Nice to see what your son looks like - sooo handsome!! And you look beautiful too, as you are holding each other. I am in the same situation with my two sons and feel just like you described it - again: you're such a good writer!

Love these shots of you and your guys! Your son and hubby sure are handsome. And you sure do have fun! beautiful shots of Winsor, too. What a lovely spot to grow up.