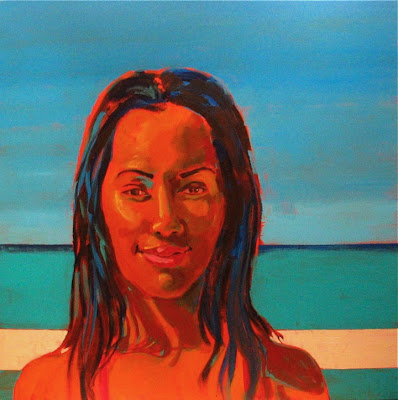 Water series Image Two
Stage Five
Acrylic on canvas
30 x 30 inches
Barbara Muir © 2010
(I started work on the beach, and have to
think a bit about where I'm going now. Do
I keep the same thin strip, or change from
lighter sand, to darker sand and hold
onto the connecting horizontal bands?
Questions for tomorrow.)

Today was a day of high contrasts. Steven and I began
the day early for a Sunday, planning how to help
the Easter Bunny fill the baskets and hide the
chocolate eggs for our grown children. We are
a pretty good team by now, and we filled, and
wrapped the baskets in short order. I'd found some
huge bunnies which we set out at each place. This is
all part of our expected ritual. Then we blindfold the
children. (This started with my sister for some reason
years ago. The reason has been lost but the tradition
is intense with our kids.) We lead Sam blindfolded
down from his bedroom to the basement where
Christopher and Megan were then herded all three
up the stairs blindfolded. In the kitchen we twirled
them each around three times, counting, one, two,
three then they could take the blindfolds off and look
for eggs. Christopher said that the blindfolds now
remind him of Gitmo. The morning had begun. 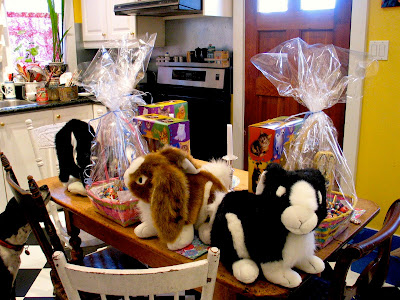 The crazy looking Easter table before breakfast
and the Easter egg hunt. Zoey the dog would
really like both the eggs and the toy bunnies.

Our traditional holiday breakfast is champagne and orange
juice with iced coffee cake. But no one wanted that
drink today. This morning everyone ate coffee cake and
strudel, boiled eggs and toast, and they all drank coffee,
even Sam. Meanwhile the hunt had begun. Sporadically,
and eagerly they hunted for chocolate eggs in bursts,
with me and Steven offering silly hints. It was a lot of
fun as always.

Then we drove Sam to the bus stop, and Steven and I visited
Kensington Market and part of China town. We were tempted
by many restaurants, but went for a bit of a walk and
headed home for reheated turkey (still delicious). 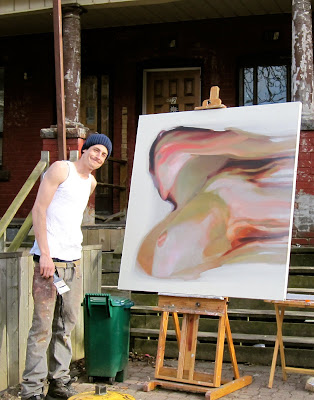 Kieran Brent works on a painting
outside his Kensington Market area house.

In Kensington Market, in front of a run down house on a side
street, I saw an artist working on a great canvas. I asked if
I could take his picture, and he agreed. So let me introduce
you to Kieran Brent. He was working with a large brush,
and I like what he's done with the image so far. Kensington
Market has been a haven for artists since I went to OCAD
(a few years ago). It was great to see an artist confidently
working away in his front yard.
Posted by Barbara Muir at 8:10 PM

A great day - and wonderful paintings from you and Kieran : ) Wasn't the weather amazing?! Are you over your cold?

Easter came and went very quietly here. The kid was off to see his grandparents and Debra and I went out for a nice lunch. Other than that we goofed around on the computers and then took naps. Was a good day. Now I've got to get back to work.
This painting is coming along nicely. I really like hearing you think them out.
E

Hi Barbara
Your work and blog, both exude so much warmth, love and energy – it’s an inspiration to all of us.
Your painting looks great!! You’ve captured her insouciance!!
xoxoxoxoxoMarcia

This fantastic portrait has such an elegant sense of dignity and happiness. It is quite meditative to gaze at this woman's face.

Love the colors and how masterfully you've handled the entire canvas. I like the bands a lot. They say water and beach and outside in the sun. Really well done.

It was a great day. It's raining now, but we need that too. The cold is almost gone, thanks so much for asking.

Sounds like a perfect Easter. My house is filled with dollar store decorations and the coloured eggs (emptied of their contents of course) that I've saved from every time Sam gets into colouring them. So it looks festive. Our Easter was busy and interesting. I love having my sons and my son's fiancée around.

I miss you. I hope you got through the holiday without a lot of fuss, or tension. Thanks so much for your kind thoughts. You are too sweet and you know it.

Thank you so much. I like the thought of a meditative look. When you're pursuing an idea, you're not always sure why. I know the basic motivation, but don't know exactly where I'm going. Instinct takes over when I'm actually painting.

Thanks for your reassurance. I do find myself looking at this one, and wanting to go there right away.