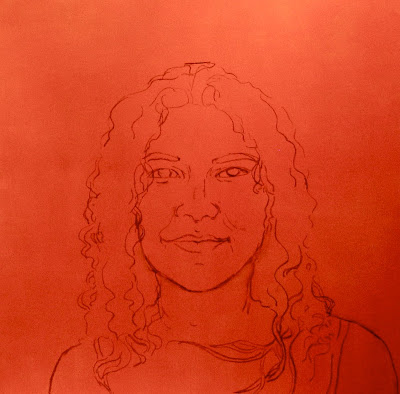 Drawing for Image 3 of the Water series
acrylic on canvas
30 x 30 inches
Barbara Muir © 2010
(I've done the drawing for the beginning
of the third portrait in this series. The model
is from India, and that permits me to
include a third ocean behind her. I will
find out tomorrow if she is at the right
height to go with the other two
paintings. Her hair meets the magic
line vertically, but there are a lot
of other measurements I need to take.
At the moment this is going to be
a separate triptych. That is
the paintings should go together
and ideally would be hung in a row
touching, but as long as they are
displayed at the same height they
will read as a triptych.)

Writers can take years to complete a novel. A major
work takes time, thought, space, and has to fit around
raising children, parents, the work that supports it,
and life. In art the same phenomenon happens. But
in art it's the mega idea, that sometimes has to quiet
down, just so art can happen. What do I mean?

I mean that it isn't practical for most of us to find the
time or money to produce the Sistine Chapel. But
painters want to paint. Lately my dreams have been
filled with images so magical, and fantastic, that when
I wake up I am overwhelmed with how amazingly
cool those images are. I would like to translate them
to canvas -- but some of them would take years to
produce, and there are shows on the horizon. So
I have to trim the cool. When I was writing for
magazines, a common piece of advice to writers was
to kill your darlings. That meant that the sentence
which will probably ruin your article, is the one you
love the most. It meant be willing to edit.

In art this is also true. But today I had a supremely
comforting thought about all of this. I said to myself --
self I said, you can paint those images from your
mind that will require more time than you've got
right now, and you will...later. Telling an artist
later, even when that artist is you, is about as easy
as telling a two year old later. We are right now
people. Not that we don't have patience, we have
a ton of it. We always have to wait for paint to dry,
images to evolve, models to have a day for an
appointment, money to come in for paint and
brushes -- we know how to be patient. But we don't
love that patience, and we are like dogs on a too short
leash at the edge of a beautiful green and grassy
park, when we've got an idea festering.

Still the idea of future possibility put my patience
into gear. I guess I'm the dog who got the cookie.
It's been a wonderful day, and I want to paint
now. So I'll tell you all about it...later.

Have a trimming-the-cool day.
Posted by Barbara Muir at 7:54 PM

Email ThisBlogThis!Share to TwitterShare to FacebookShare to Pinterest
Labels: trimming the cool. Cool beginning of a portrait. acrylic on canvas. Toronto. Canada

I think this is an interesting series you are working on and I can hardly wait to see them all together (hopefully you will be able to post a photo of them as a triptych.

I love the pics of your kitchen garden... what a joyous looking home you have.

Thanks so much. It is a secret protest against our treatment of the world's water. But it will remain totally secret. I will post them as a triptych when they're done, and they work together.

I hope you're getting time to paint Nicki. I feel like you don't know that you're as wonderful as Monet. Melinda Esparza wrote a great blog about that. Her link is on my list.