Back to my birthplace 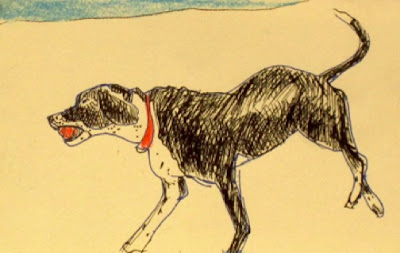 Running in snow with the red ball
Marker and coloured pencil on bond paper
3 x 5 inches
Barbara Muir © 2011
I was born in Windsor, Ontario, something that would have
been easy to forget if both of my children hadn't decided
to go to university there.  I left when I was four to move
to the giant metropolis of Ottawa, and moved from that
cultural hub to Toronto -- where despite travels, and short
stays elsewhere I've made my primary home as an adult. 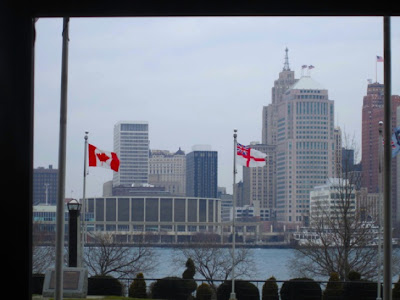 View of Detroit through the front  doors of our hotel.
It occurred to me yesterday visiting my son in Windsor,
that he and his brother will have spent the same number
of years as I did there by the time Sam finishes school
next year -- four years.

Sam is studying acting and we visited to watch him in the
play No Exit by Sartre.  I know I'm a biased parent,
but he was good, excellent even, and so were his classmates. 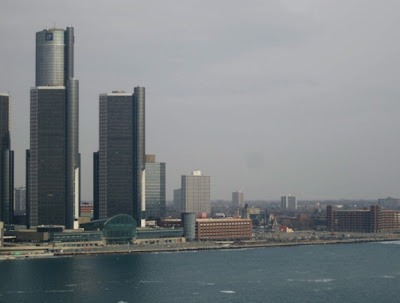 View of the GM building in Detroit from our hotel bedroom window.
The white on the river is ice.
In fact the whole trip was a treat -- the long drives, the break
from routine and work (although both Steven and I worked
before the play), and our hotel room facing out onto the
river with Detroit not even a hop, skip and jump away.
Then it was sheer delight to watch Sam acting his part
so well.

When I was a child Detroit was Windsor's downtown.  It
was no big deal to cross the border, and my mother routinely
took us over to the big stores there to buy our clothes.
My father worked at Ford. The relationship between
the two cities was easy and natural.  Things have changed
massively, but Windsor and Detroit are focal points for trade
back and forth between the two countries, as witnessed by
the constant line of trucks going both ways on the Ambassador bridge.

We also visited the Art Gallery of Windsor yesterday, which
is a gorgeous architectural structure with magnificent soaring
spaces, and lookouts in the shape of  a ship's prow built entirely
of high windows.  And an extra bonus is the fabulous restaurant.

But what also excited me was an understanding of why I have
always  felt such an affinity with Americans.  I was born at the
southernmost tip of Canada.  We were spiritually neither here, nor
there.  The river at some points is a few blocks wide.  We were driving
along Riverside drive yesterday, and a lovely church
on one side of the water was echoed in the same warm russet
brick on the other side.  Without instruction either side could be
either side. And that's an important thing to know.  Perhaps that's
why I feel that we are all one.  That doesn't mean I don't see
what's wrong with both of our countries, or that I don't feel
Canadian.  It means that I am conscious, and no doubt this began
at birth, that the world is much smaller than we think.

So that was my Thursday.  I taught so early this morning that I
still feel exhausted.  The drawing tonight is a small sketch I
found of Zoey running through snow.  We are in the center
of a blackout in our part of the city.  But somehow our little
street has been exempt from the trouble.  High winds have
knocked out power lines after a day so warm, balmy and
drenched in light all day, that my cats were getting spring
fever and complaining heartily about their indoor cat status.
Now it's cold and the wind is whipping down
branches, taking debris off building sites, and cutting out power.
Time for bed.

Have a getting-your-power-back day.
Posted by Barbara Muir at 10:02 PM

Hi Barbara,
Sounds like an enjoyable trip, even inspite of the long driving. You must be so proud of Sam! Thanks for your interesting writing about Windsor etc.
My sister lives in Ann Arbor, not too far from Detroit and has mentioned Windsor several times before. They go there for shows and exhibitons sometimes. I wasn't aware of the fact that it is right opposite of Detroit.

Oh, and I LOVE this drawing of Zoey!

Oh, I love the simplicity with the bit of red! The play and your day sound wonderful, Barbara.

Barbara
What a beautiful post - the writing, the photographs and I love the drawing!
It's true about border cities - My aunt lived in Windsor along time ago and she'd hop over to Detroit to hear cool jazz, Duke Ellington etc. And my grandmother lived in Niagara Falls and shopped constantly in Buffalo for great textiles. Then too, Detroit has the Institute of Fine Arts with the great Diego Rivera mural and Buffalo has the Albright Knox or is it the Knox Albright?? They have the that wonderful standing figure by Gaston Lachaise!

That is so interesting Barbara that you had both places in your consciousness as a child and beyond. Thanks so much for sharing that and for posting those photos. I had no idea that Detroit was so very close to Windsor.
Congrats to Sam too!

It was a lovely trip. Great weather. Driving at night the shapes of moonlit snow covered fields and banks of trees that reminded me of the simplicity of paintings by Toni Onley. The colours even at night are magnificent as you drive, and Steven and I sing, laugh, listen to music -- so that even the drive is a great part of the journey.

I must meet you and your sister in Windsor one day! That would be fun.

My dog's collar is red with xoxoxox on it -- that seems appropriate to me, and she loves to steal brightly coloured balls from other dogs and run away with great cheer carrying the ball. Red and orange, especially orange are her favorite colours.

Yes we had a wonderful time in Windsor, and one of the best meals I've had in a long time. Good to know.

If I'd had my passport with me I would have braved the long lines of vehicles to go and see the gallery in Detroit. My brother says he wasn't born in Windsor, but in downtown Detroit while our mother was shopping. He says that's his story and he's sticking to it. Funny!

I hope you're having a great time drawing, painting and sculpting.

Well I nearly drowned in the Detroit river. It used to be clean enough to swim in, or at least my parents thought so. We were at a Sunday school picnic I think, (I can't imagine that anymore), and I wandered into the water. I remember how beautiful it looked above my head, until someone fished me out.

But thinking about it my parents lived on or near water most of their lives, so it makes sense that I crave the sight of it so much. And even though I know that the river is filled with chemicals it is irresistibly beautiful to look at.

Lucky you. You can get to the big ocean in minutes.

The drawing of Zoey looks so good, I can see it in a catalogue of your work someday! Excellent.