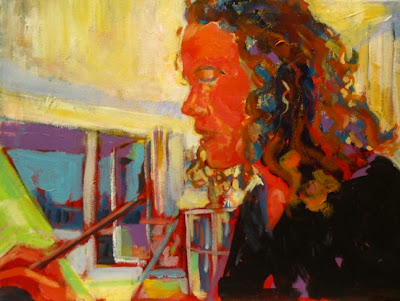 In the midnight sun (work in progress)
(Stage Three more blocking in colour)
Acrylic on canvas
14 x 16 inches
Barbara Muir © 2011
There have been so many discussions about mimesis,
or copying of one sort and another lately.  When I thought
about my blog tonight I was going to title the post Permission.
But I started listening to a show called The Scapegoat on CBC
about mimetic desire -- which talks about how our tendency
as people is to want to be like those we admire, but as soon as
we become like other people we will try very hard to appear
different. 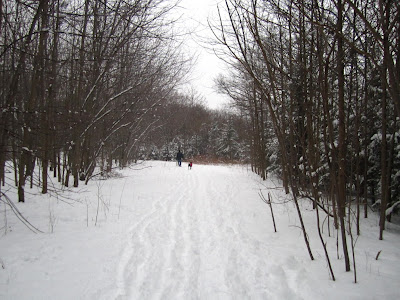 Steven and Zoey in our park
Maybe too much for a Monday night.  I have a minute because
I'm cooking meatloaf.  Steven and I had a sudden overwhelming
desire for it, but we rarely eat beef, so it's a chicken meatloaf.
And actually I got the recipe from two different recipes on the
internet.  But the point is I have time to listen to this show
while the meatloaf cooks, and to think about you.

My original idea was inspired by talking to a friend who had
posted a gorgeous photo of a house in a great winter landscape.
I asked if I could make a painting based on that picture, and I
asked about another photo.  Both photos just transported me.
She gave me her permission easily. And another conversation
centered around a friend doing paintings from snapshots of
my friends' favorite things.  The artist had taken shots in her
house, then developed work based on those images without
asking for permission.

The painting I'm posting tonight is a small portrait I'm working
on for myself as part of a triptych I will show later this spring.
I started the series when talking to my friend Henriette on Skype,
but wanted to make sure I had her permission to show the
paintings publicly.  She gave it and I've kept on going.  It seems
such a simple thing to ask permission to use our friend's
reference, but I also understand that we get caught up with
inspiration and forget. 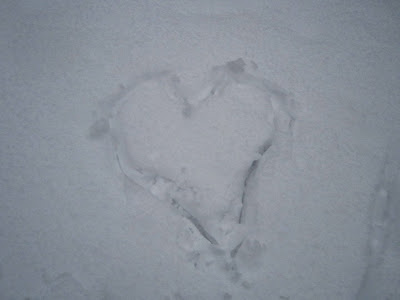 A snow heart for you.  It's the end of the month
of love, but don't worry...the love continues.
And spring is not far off.
The meatloaf is ready, the radio show is over, and it's time
for dinner.  Forgive me abandoning such a juicy topic, but
in this case dinner is more important, not than you of course,
I wish you could join us.  You know what I mean. I think.


Have an asking-for-and-giving-permission day.
P.S.  This would have been my father's birthday.  I miss
him so much. Now there was a man who could create
an image.  My father was a fabulous photographer.
Happy Birthday to you Daddy.  We were thinking about  you.

Fabulous colours! Dreamy scenery/landscape in snow! Lovely, gentle reminder that when we respect and like each other, we would want to ask permission before using another's work.

With permission, artists can honor the work, share the work and collaborate and inspire the work.

And, you made my mouth water for food! Yummmm.

This is coming along beautifully! I really like that look of concentration that we all get when we are lost in a project.

As always, I enjoy seeing your progress on a painting. Your colors are always so bright and happy.

I listened to The Scapegoat and am looking forward to Part 2. It is an interesting subject and continues to show us how complex we are. Thanks for sharing .... now I am hungry for meatloaf! :-)

Wonderful senitments throughout! (I'm late for dinner - by one night but I'll bring dessert?!) Your colors, as always, are superb, Barbara!

Great colours and space! I very much like the composition of the head being so close and the room opening up behind it. Coming along very beautifully!

Thank you so much. Yep. It's hard to remember all the niceties of life when you're busy trying to produce work and wash the dishes, and feed the cat, and whatever else, but it does help to make things run more
smoothly.

The meatloaf was fantastic! And it fed us for two nights.

Thanks so much. I do too. This series (and this is a sketch off-shoot of the series) really makes me happy.

Thanks so much. Isn't that an interesting series? Part 2 was great too.

You are welcome any night of the week, with or without dessert. Just call first so I can tidy up a bit.

Yes -- thank you, I must do one of you sometime when you get Skype. That would be fun.

You are amazing. I love your devotion to Dad!