Great news, a Hotel sanctuary and more from the bus 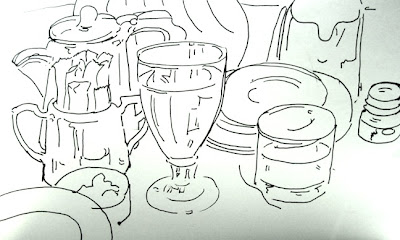 After breakfast meeting
Black marker on Moleskin paper
5 x 9 inches
Barbara Muir © 2011
(My oatmeal this morning was cold, not hot,
but even so, eating breakfast in the
room is one of my favorite pleasures of
hotel life.  I love the china, the tiny jars of
jam, the thick, old hotel silver, the breakfast
wheeled in on a cart table with an ironed
white tablecloth.  So we eat beans for the
next month for a meal of cold oatmeal,
I still think it's worth it.)
After last night's somewhat taxing trip from Toronto
on what was supposed to be a first class train, and
quickly turned into a quite uncomfortable bus (but
not the yellow school bus some of us were afraid
would be provided), I am relaxing today.

Sally Chupick who recently opened the Gallery at
the Porch Door just outside of Kingston, Ontario,
Canada was featured in the local Kingston paper,
The Whig Standard. I think Sally's a media natural
because she's so warm and kind, pretty and talented.
So she better get ready.  My name is mentioned in the article
along with all the other terrific artists she's showcasing.
Sally is the kind of person who loves people. That
makes her the ideal gallery curator.

More from the bus
After we were switched to the bus yesterday for a
long, long ride without rest stops, beverages,
anything -- I settled down to talk with my seat
mate Mike.  We talked about many things, the
legal system, politics (we shied away from that
one quickly), and finally got around to 'what do you
do?'

This lead to a conversation so engrossing that I
hardly noticed the horribly uncomfortable seat.
You know I am dead against nuclear power.  My
normal reaction to anyone raising the topic is decidedly negative.
But the atmosphere on the bus was so genial, people
were so tired, dispirited and disappointed, that
when I found out Mike worked for a government
organization that manages (among other forms of
energy) nuclear power, we delicately negotiated
an open, thorough discussion on all forms of
energy. We discussed the trouble with our over consuming
public, with storage of nuclear waste, and he told me about
exciting new developments in energy creation (not nukes).  And
when we got off the bus in Montreal we were friends.

I haven't changed my mind about nuclear power one bit,
but I am thankful to Mike for the information he gave
me on several other (clean) sources of energy.  When
Steven and I went to the hotel I said I've just met the
first person working with nuclear power that I like.
I hear your reaction.  You're saying the poor girl is sick, and
maybe I was a bit more vulnerable, but I have to
say if peace and understanding is our objective, maybe
that's not such a bad thing. I do believe that there can be
no change without understanding.

I totally love your drawings, Barbara! Hope you are feeling better. Have a fun rest of the weekend...N

Barbara, thank-you for commenting on my blog (I still have blog clog and blog comment merry-go round going on in Linnyland.) I hope that you are feeling much better already! Congratulations on the publicity and on making it to Montreal. Your drawings are the best!!!

thank you Barbara for your glowing mentnion in your blogpost. I think i got more than usual blog visits because of it! you are a gem, and so are your paintings. Safe trip home with no hiccups, and i love your breakfast sketch.

Great sketch! And, how great that you both listened!

Thank you so much. I am having fun and feeling better.

Sorry about the clog and blog thing. Your work is so lovely. I am feeling infinitely better today.

Thanks for the great wishes. Yes a safe trip home on the train all the way would be miraculous.

You are so fantastic. You deserve a lot more attention from the media.

Thank you so much. Yes it was quite special that we could listen to one another.

Harmony, understanding, and perhaps change -- that would be the best outcome. I've been thinking about it since I read your comment. I think it's what many people talk about as the 'higher self'. If we could just go there -- all of us, what a great world we'd have.