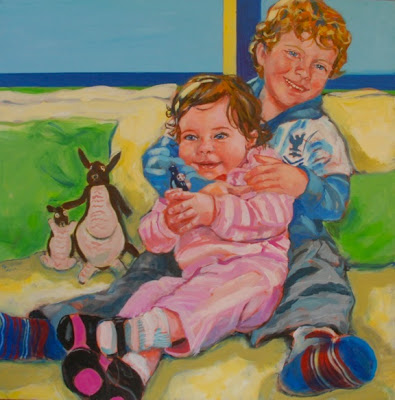 Play Time
Acrylic on canvas
30 x 30 inches
Barbara Muir © 2012
SOLD ♥
Hi everyone.  If  you're a father I hope you had a heartwarming day.
If you were with your father Happy Father's Day to him. We took
Steven out for breakfast at the Avenue Road Diner at the corner of
Avenue Road and Davenport. Most weekends he brings me coffee
in bed while I read the paper and my novel on both Saturday and Sunday
so he more than deserved the treat.  Steven and I first visited the diner
after our first date, when I helped him move into the
apartment he lived in for about three months before he moved
in with me forever.  So the owner knows us, the food is delicious,
there almost before you order, and served in a cheerful atmosphere.
Yesterday of course people were treating their Dads to one of the best
breakfasts in town.

I'm sure Steven enjoyed the day.  We gave him gifts -- one of the
sweetest a small town scape painting by a friend.
We had party sandwiches from the bagel place in Forest Hill
Village for lunch, and sat under a shady tree on a side street,
where we "picnic" all winter (in the car) talking and laughing


Flying in with a winning present

In the evening we picked my older son up at the airport.  He
was flying in from L.A. where he'd been working on photographing
Sidney Crosby, the hockey player from Nova Scotia who scored the
game winning goal for Canada in the 2010 Winter Olympics in
Vancouver.  Crosby is a hockey hero for Steven, and even though
neither of my son's play, they understand their Dad's passion.
The boys gave Steven a signed puck from Sidney for
Father's Day, and you should have seen his face light up. We had a
great dinner at The Golden Thai, rushing through the traffic to
make it just before the kitchen closed.  And I know at the end
of the day, Steven was absolutely certain that we all love him to
the max.


The thoughtful gift -- a painting of the children

Today's painting is a commission I loved working on from the
beginning.  The children's mother asked me to do it as a
Father's Day present for her husband.  The children -- a
three year old boy and his baby sister were lovely, and were
adorable in the pose I chose from the many photos I took
of them.  Their mother is a wonderful woman who I painted
before when the boy was a baby -- so there was a sweet feeling of
continuity too.

The best news of all -- their father liked it.  So here's
to all you fathers out there, and the women and children
who love you.  And thanks to my kids for making their
Dad so proud. 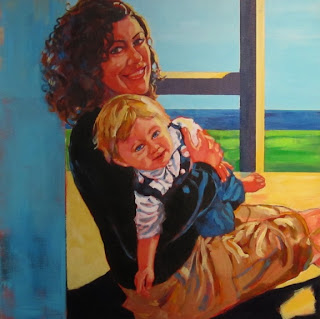 What a lovely post! I love the paintings and the beautiful sentiments you shared.

I'm so glad that Steven had a good and loving Father's Day. Is there any greater gift than to have a loving set of parents? I don't think so. All trials are softened by the love of a good and thoughtful parent.

Glad you have all that you need in your family. What a gift. Your strong talent is the icing on the cake of life!

Be well. Be happy. Be strong. You have a ton of people cheering you onward.

Thank you so much. These children have that for sure -- the kindest parents going. I am well, and I hope you are too. I am cheering you on with all my might. I wish my sneakers had wings, I'd be down at the canyon in a minute watching you paint.

Lovely paintings,Barbara, both of them. I know the client will be thrilled to recieve them. Sounds like you enjoyed a lot of eating out on Fathers Day:)

Yep the lower one was done in 2010, and the top one was new. Yep we sure did eat a lot of great food. Have to buy new sneakers so I can run it off.
But we had so much fun -- not just eating.

Sounds like a great day for Steven and all of you!! And I love, love, LOVE these paintings. So delightful and happy.

What a wonderful painting of the two children. I remember when you were painting the first portrait and now there is a baby girl in the family. How wonderful that you have been brought in to record their family's evolution!

I know a ten year old boy who would have lit up like Steven did if he received a signed puck by Sidney Crosby!

Thanks so much. I'm glad you like the paintings. Father's Day was a super day. Steven is pretty easy to please and we gave him the perfect day, topped off with the hockey puck. In Canada Crosby is a big hockey hero. We all see him skating around the rink after he helped us win the Olympics. This year has been very hard for him, but his injury may bring real change to the sport. So he's doubly a hero.

Steven's the only one in the family who is an ardent fan, but we all support him in his passion.

So glad you like the new portrait and remember the first one. Yes the baby girl is really lovely and her brother a complete sweetheart. That was a delightful project.

Wonderful color in both of these!

Thanks so much that means a lot to me. Love your work.

Thanks so much Linny,

That is certainly one of my goals. I feel happy every time I see one of your paintings.