French songs on the radio

Tonight CBC Radio is playing French songs. I understand
just enough to enjoy the love songs, and the voices are
beautiful. I was raised for part of my childhood in Ottawa,
and we started French in school early. Most of my
understanding has disappeared through lack of use in
English Toronto. And in recent years friends speak
more Italian and German to me, than French. But the
roots of the language linger in my baby girl unconscious.
I was probably five going on six when I first learned
some French words.

Every year we go to Quebec city on our way to Nova
Scotia, and on our way back home to Toronto. I know
enough French to know that I wish I knew French, and
I steel myself for the embarrassment of not knowing enough
to speak even haltingly anymore. At night in my hotel room
before I venture into the lovely city, I rehearse how
to say some inadequate sentence to explain my impossible
lack of skill.

In Europe children easily learn five or six languages, but
the English in Canada have been somewhat reluctant
to learn even one other language. Some people place
their children in French immersion schools, but that
is only highly successful if the children's parents
speak French too. 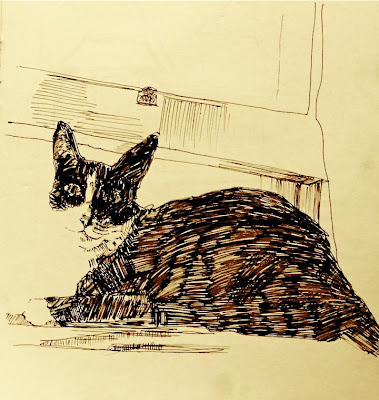 Sketchbook drawing of Clown Cat
marker on Bond paper
As a complete non sequitur It's time for us to head out
to a movie with our friends. Christmas seems to make us
nostalgic. We were talking today about the great animals
we've owned and loved. Here's a drawing I did
of Clown the cat. Indirectly Clown brought Steven and me
together. He took care of the cat for me when I was away
on a trip, because his sister asked him to, and that's how
we met.

Have a loving language day.
Posted by Barbara Muir at 6:33 PM

Loved the kitty drawing! French! I do not believe it! I went to a private school (Catholic) and French was a required language along with Latin and Greek (so we could understand Mass and also the root of words and therefore there menaing). While I was driving a truck I was sent to Quebec many times to pick up peat moss or deliver oranges or some other goods. Fortunately I remembered enough French to get directions because no one...almost no one would speak English to or with me. So between my little handbook (taken the second time I went up there) and what I remembered from school I was able to read signs and speak enough to get by. Horribly, I might add! My point is...many countries speak their native tongue plus several other languages...but most people in the States absolutely refuse to learn another language...too bad for them and how egotistical and simple minded of them to boot.

Thanks. I loved the kitty too, and this is so her. I studied Latin too, briefly, but not Greek. One of the other profs at school occasionally speaks to me in Latin, and I understand some of it, but need a translation for the rest. This fellow speaks 30 languages fluently, and I struggle with a smattering of French, and my grade 10 German.

When Pierre Trudeau was Prime Minister he tried to get Canadians to be bilingual. A lot of product information is in two languages, but the majority of Canadians cannot
speak French. Sad. It's a beautiful language. My friend and I were thinking about studying Latin, but alas -- no time tick tock.
Got to paint. Je dois peindre. Is that right?