Getting back into the groove

This week we're going to have a New Year's Eve party,
as I've probably said. But the coming new year also
signals a time to try and get the loose ends of our
lives tied up. There are so many little errands and
chores that pile up at the end of a school term,
especially when the end of school slams right into
Christmas, and all the exciting preparations that
demands.

So today we've been out picking up packages, and
running errands. Tonight I settled down to draw
Steven as he and Fiona watched a movie on TV.
I could not tell you anything about the film
except that it was about soldiers who are asked
to go back to Iraq after their tours of duty are
over. Other than that the movie was background
noise to the job of trying to capture Steven and
Fiona before they moved. This is how far I got. 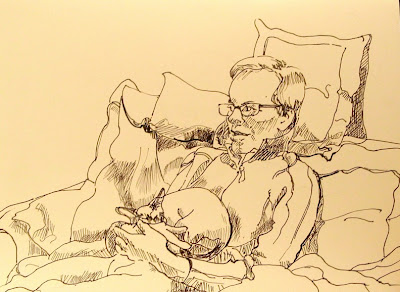 Watching TV
marker on watercolour paper
Have a loving-one-another day.
Posted by Barbara Muir at 8:04 PM

You know Max and I would love to be there!!! What a hoot! I commend you on for drawing regularly...it's wonderful!!

OOps sorry about the for where it need not be!

Now that would be exciting! I don't think I'd get over it for weeks!!!
As it is we always have so much fun with our friends, that I look forward to this party every year.

Love the photo of you and Max and your amazing painting.

Barbara, I so love your drawings. I agree with Theresa, you are to for be commended for drawing as you do. :) Anyway, thanks for sharing those with us. Awesome.
EW

Hi Eldon,
Thanks so much. Just trying to keep
my hand in. Boy when I can pull out the paints and make a mess again I am
really going to be like a kid at a picnic.