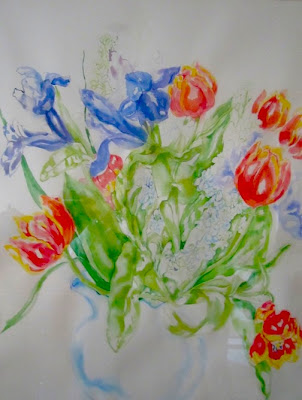 Spring Flowers
watercolour on watercolour paper
20 x 25 inches
Barbara Muir © 1994
(Here's another piece from my
sister's collection of my
paintings. I switched from
watercolour to acrylics because
I couldn't get the intensity I
wanted with watercolour.)

Most painters, like good soccer players, and hockey stars
start painting at about one or two years old. In fact we all do --
every human being has the urge to push paint around,
draw something, model something in clay, or plasticine
as soon as they get the chance -- starting as babies.
But something happens to a lot of us along
the way to stop us from keeping on with it.

In writing -- another art form -- I know from asking my
students that the event cutting off creativity frequently
involved a teacher. As a teacher I realize that perhaps
the remark that stopped the creative process might have
been meant very innocently. But children just getting
their artistic legs under them, and many adults too,
give up at the first sign of resistance, or lack of acceptance
or praise for what they're up to, or (ouch) criticism.
It is very, very hard to teach without ever criticizing.
I'd like to learn how.

So I began painting, or more likely drawing at about three,
and painting at four when I entered kindergarten. Painting
and singing were the two things I liked about kindergarten.
I missed my mom, and the sound of her singing, and
clattering about in the kitchen making cookies and bread
and supper. I missed playing with my dolls and making up
scenarios, and what's stuck with me my whole
life is, I missed doing nothing. That's right nothing.

Only now that I'm an adult, and take a camera or sketch
pad with me when I'm doing nothing, I realize that I never
was doing nothing. I was either looking, reading, or thinking.
All perfectly acceptable habits for an artistic child, or adult
for that matter.

Get to the point you're saying. The point is that before a
big show, it's time to get organized. And how do you do that?
I've found that an invaluable tool is the giant list clamped onto
a big piece of foamcore. It's light, and colourful, and I can prop
it up on the kitchen counter during the day, and put it away
at dinner time. Then all day I can cross off tasks, until finally
I am at the opening, and the bulk of the work is done.

As for the painting, which is by now both passion and habit.
I have been doing some, and it looks like I might have about
50 pieces to put in the show coming up on Friday. That's good
news. But after all I started painting when I was four, so
by rights I should have some work put aside today.

Have an I've-been-doing-this-my-whole-life day.
Posted by Barbara Muir at 7:04 PM

I don't remember anyone beating me up too bad when I was a kid. Thanks to all those folks who could have and didn't. Aint we lucky?
E

It's funny to see that it is normal (and that I am not just lazY) we artist all over the world just cannot start working early on the day :)

Yes, what is it with us? I try every morning to get over to the studio early and I get there around lunch time everyday.

We are lucky. My kid stopped painting altogether because of a teacher who wanted him to be representational long before he was ready...before that such gorgeous art.

Your art is amazing. I meant we start painting when we are one or two years old. I do prefer to work later in the day, but regularly paint all day when I'm on a deadline.

Thanks for letting me see that my post wasn't clear enough. I think it is now.

It's true that I'm more comfortable painting after noon, but I do paint whenever I need to, so sometimes I am
painting all day and night.

I guess the reason some of us paint better at night is because the world is quieter then, and we can work without interruption.

But my blog was unclear, I was talking about when we begin painting as babies, at the age of one or two years old.