I know what to paint 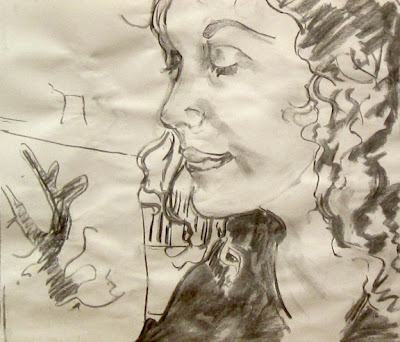 Henriette painting
Charcoal on bond paper
14 1/2 x 16 1/2 inches
Barbara Muir © 2010
(I just starting experimenting with how
I'd work from my Skype images
and the paper was not perfectly
flat because I use it as a kind of
provisional palette, and the
paper underneath gets wet.)

A couple of days ago I looked at the two 30 inch x 30
inch canvasses hanging around my studio, and
thought I want some paintings on those. When
I stopped in at my paint store I asked a fellow who
works there, who I've been talking to about art for
ages if he'd pose for my Water Image Series, and he
said yes. He has a great face, filled with the character
and joie de vivre you'd expect in a young artist.

So he'll be the subject for one of the canvasses, but
what about the other one? The answer came today.
I was talking to my friend Henriette on Skype, and
the whole time we talked she was painting. Just
back from New York and seeing the William Kentridge
series of powerful drawings of his wife getting into
the bath, I suddenly thought it would be cool to do
a series of large portraits of Henriette painting.
(The idea of a series has always appealed to me
and more so since I read about the work of Larry
Rivers a few years ago. The power is what attracted
me to Kentridge's drawings, and the close up in
portraiture is another form of power.

Henriette sure is painting. She has paintings in a
show at the Louvre in Paris this weekend. So she's
a mega painter. She has two young children under
two, took part in the Florence Biennale, and just
had a successful show in London, England.

While we talked she worked away at a new series
she's developing, and off in the distance through
the window in her living room, the
Norwegian night gradually descended -- only
never really did, as is its habit at this time of year. And
I had great memories of being in Sweden and
enjoying the late evening sunshine when I was there
with Steven in 2006.

Have an aha-that's-what-I'll-paint day
Posted by Barbara Muir at 10:42 PM

Even with the wet paper, I always enjoy your drawings.

That means a lot to me.

I like your idea of what to paint... another painter painting. I think it will be good! I'm sure you will come up with some very interesting compositions. Does Henriette have a website or blog of her own? I'd love to see her work.