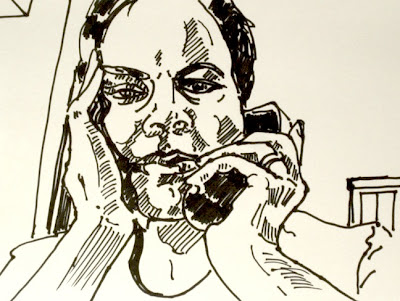 I'm listening
Skype portrait, black marker on bond paper
8 1/2 x11 inches
Barbara Muir © 2010
My day started with the alarm beeping very
early this morning.  I'd been marking until the
wee hours, as I have been for more than a week.
But I rushed around, got ready, hurried out of
the house with lunch and bags, and inside boots,
and outside boots, and muffled up to the max
in down and fake fur (it is one cold time of year),
and off to the garage that has my tires for the
second time.  This time I sat calmly marking, met
a very nice gentleman who told me stories of his
life in India and Scotland when I took breaks
from marking, and waited. And waited.  For
two and half hours. The problem?  The machine that
broke the first time I came over a week ago, broke
again and I couldn't get my snow tires on.

Oh my.  I was upset.  The nice man who had to
break the news started handing me gifts -- a notebook,
an umbrella with the garage logo.  It reminded me of
the character in the movie Love and Other Drugs, who
escorts the doctors into the hospital in the rain with a
drug logo umbrella.  Only the sun was shining, and the
product -- snow tires (which I own and are stored there)
-- were still not on the car.

The running news loop on the waiting room TV was
of the snowstorm in London, Ontario, two and a half
hours away, where they've had more snow in two days
than they normally get in half a winter.  So I will need
those tires.

When I came home after teaching, the cats had knocked
over a poinsettia plant in the hall, eaten part of it, and
made themselves ill.  So there was dirt, plant and cat
sick to clean up.  Ah well.

I am good at picking up the mood.  Thank goodness.
I ate dinner, and now for a change I'm going to...mark.

Here's a Skype sketch to end the day on a happy note.
I like the mood, and enjoyed the challenge of working
with a thick, black marker.  Drawing like this creates
an image almost like a woodcut.  Nice.


Have a picking-up-after-the-cats-and-enjoying-it day.
Posted by Barbara Muir at 8:08 PM

You certainly are "good at picking up the mood"--maybe one of the best at it: I'd like to take coping classes from you! (And painting ones too.)

phew...I'm exhausted for you. When the snow arrives, could you blow a little down south?

You are a force of nature----Not to be out done by snow or snow tires!

I love this sketch with all of your beautiful lines. Yes, like a woodcut, but without the cuts!

Thank you for sharing your day with us. I've turned on our little space heater now. Brrr. It's 17 Celsius here (64 degrees Fahrenheit). Hope you get a chuckle out of this.

Why do our pets always make a big mess when we are the most harried?!

Oh my, I admire your work with the black marker, I never thought it would make such an easy on the eye piece,I would have expected extensive roughness and no detail but your work somehow avoided these!

I had a day like that on Wednesday.... when I had to get my show up! Long story, too, involving a six year old with a temperature of 104 and a van that was frozen cold with zero battery power! Good times.

I love this sketch by the way and you are right, it gives the impression of a wood cut.

Oh dear, Barbara, what a day! And after all that you still find the energy and mood to write on your blog - I do admire you! Love the drawing!

Well for one thing I teach that skill, and for another I hate the feeling of being upset. Crying makes my face look bad -- and I mean bad. So of course I do it, but I don't want to stay there. You don't need painting lessons from me. I love your work. It's amazing.

The snow has arrived, there's a cold weather warning, and it doesn't feel any too safe in the car even with snow tires. Be happy if there's no snow where you are.

Thanks for your kind words. Cold is cold. I think it's about 64 degrees Fahrenheit in our bedroom now even with the furnace on full blast. And that is cold! But it's minus 10 Celsius outside. Cold, cold, cold. I might have meant lino cut. I remember doing them years ago. I don't have the patience now, but I love the look.

Get warm, and stay warm.

Thanks so much. I was worried about that roughness, but I think by now I've done so many drawings with markers that I'm starting to get a way of doing them, maybe without thinking.

I am so sorry to hear you had that kind of day with your little boy and the van. I hope all went really well with the show. I love your work.

Sometimes drawing and writing on my blog makes me feel better. It's as if this one corner of the world on a tough day, is dependable.