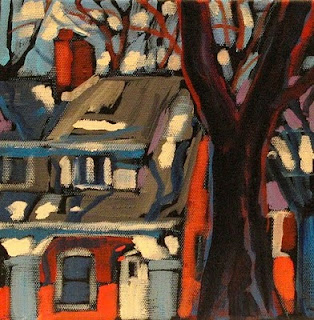 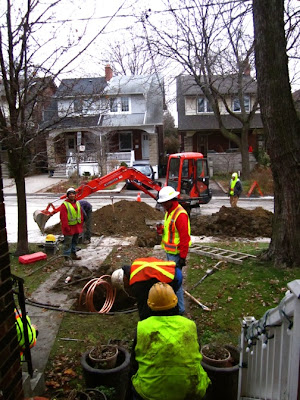 This is the sight that greeted me this morning.
Someone was having coffee on my front steps.
These guys were incredibly nice.
As Stephen Colbert would say, "Folks."
You all know that I live on the picturesque
street I've portrayed in my paintings many times.
You could almost say I've put the old street (and
it is old) on the map -- except you'd be wrong
because there are so many famous people on
the street that it should get one of those special
signs they make for tourists.  The boy at the
top of the street made a  documentary with the
director of Crash.  His dad is a prop man for
every major TV show, and his Mom, an artist
and interior designer.  Farther down my friend's
son has just published his first comic book.
Across the street is the famous designer, Davide
Tonizzo, and his wife the interior designer, and
communications expert, Sandra Pacitti, and
on and on it goes. 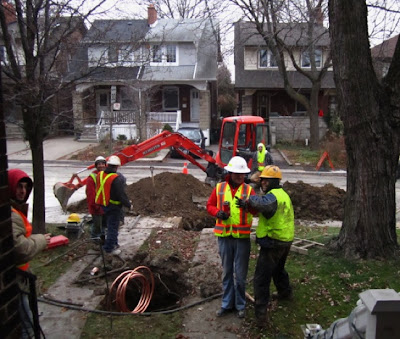 I asked if I could take their photos and they were great
about it, joking around, "I think this is my best side."

But for the past few days the Cherryhooders have
been getting a special pre-Christmas treat -- lead
free pipes into their houses.  We're getting the lead
out of the city water piping, and that is wonderful.
Of course the gift has a price, and I think in this case
a photo, or several is worth a thousand words.
Ours is done now, and the people working on the
job are fast, hard working and courteous.  Major
props to them.  They woke me up knocking on the door
this morning to tell me the water would go off
in half an hour. So after cleaning up a bit, I went out
and asked if I could take some pictures and they said
"yes!"  Isn't that great?

Merry early Christmas.  Water is vital to all
celebrations and we've got ours back, cleaner than
ever before. 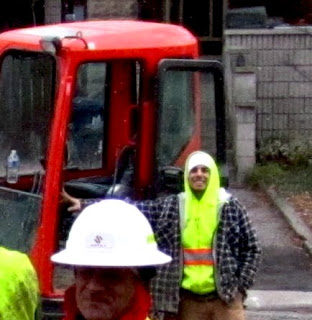 The fellow in the bright hoodie, wanted to check out his photo.
I'm sorry I didn't get a clearer shot.
Thanks people for everything.

Have an the-excitement-keeps-on-happening day.
Posted by Barbara Muir at 9:38 PM

Love your painting and photographs!

haha love the blog especially the part when you say well your wrong!!! very funny and I am never wrong Barbara :) love the pictures!!!

Yay for lead-free pipes! And the hard working guys who were tasked with the job of putting them in in what looks like cold temperatures. :) I'm sure they appreciated being appreciated! I love Sunny Winter Afternoon on Cherrywood-another uplifting little gem.

What a fun post! I'm so happy that you now have lead free pipes. A major health benefit, I'm sure!

Loved seeing your street and the kind workers.

Your painting is wonderful, too! The colors work so very well together.

I really enjoy this painting. A lot.

They began working on the lead pipes in our neighborhood this summer. Unfortunately they didn't get as far as they had hoped- the weather didn't co-operate for a good chunk of the time.

Thanks so much. We still have a lot of mud there. That's the next thing to address I think.

Is that you? You are never wrong. Good if you're who I think you are, I've taught you the most important lesson. Be right!!!! Quid si prisca redit Venus. In this case I think it means what if the old street would return, looking tidy and ready for Christmas. So that would be good right? I am pretty sure I'm right on this one.

Yes getting the lead out is a good thing. We had it done inside the house about ten years ago, but the city still needed to replace some.

Wonderful pictures of your show. How exciting.

The upside how sweet the people were,
the downside constant noise, and the aftermath a mud field. But how wonderful to know they've taken the worry out of drinking tap water. Well some of the worry anyway. It does come from Lake Ontario.

You are so onto me. Every time I see these city workers -- and this is the second time this year they've torn up the streets -- we had people working on the street for a month this summer,
I think of Edward B. Gordon and I'm tempted. I love his worker paintings, and our workers look exactly the same. It's the outfits.

You make me laugh. Funny!!!

Barbara, you are amazing how you always make the world brighter! I love this painting!!!