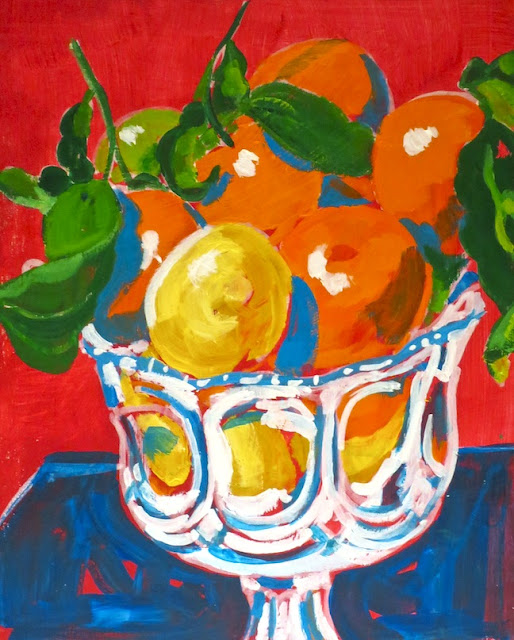 Yield to the Lemon
(Work in progress)
Acrylic on cradled Birch panel
8 x 10 inches
Barbara Muir © 2017
Is there a trick to happiness?  Yes.  People have written books
about how.  But there is a secret to being happy.  We have to
allow it.  I heard about this phenomenon called the "Nocebo
response".  In medicine it is related to telling a patient that
they will not get better. This message apparently has such
profound effects on the person's mind that she shuts the door
on hope, and may get rapidly worse.

My great happiness magic for today is to talk yourself out of
it.  Of the cold you are frightened to get, and will get if you
sneeze and are told it's coming -- watch out.  Of the depression
you could get because in this city the sky has been grey except
for one hour for what seems like most of a month.  And in
painting of the fear that you can't do it.

Try this.  Instead of freaking out about what you can't do,
start with "This is easy!"  Just repeat that a few times, and
watch your shoulders quit tightening into a vice grip.
I admit it -- given the number of people who have colds right
now -- our chances of getting one are good.  But apparently
just believing that the hot lemon I drink might stop it in its tracks
-- could. And as for painting or drawing -- we need to take a look at
how tough things are in the world, and let ourselves know how
lucky we are to be compelled to make something.

Here is my offering for tonight.  When we were in New York
last June, Steven got a T-shirt he loves at the Metropolitan
Museum.   It says "Yield to the art," which is what installers
say when they're moving big pieces through the museum.
Hence Yield to the Lemon, because the lemon demanded
center stage.

Have a tricking-yourself-into-happiness day.
Posted by Barbara Muir at 10:55 PM

I very much agree! My motto is: Worry only introduces bad ideas into the universe, and the universe might decide to act on them.

Besides, I got that cold - it only took 3 weeks to get rid of it but I won in the end.

Sorry that it's taken me a few days to reply. I am working hard on being happy.
So yes. Sorry you got that cold, I haven't this time. Yay! And good for you winning.

Please keep in touch. I loved talking to you, and love your art.

This is a wonderful post Barbara....and I LOVE that painting. It certainly embodies happiness.
It is a challenging time of year, so crank up the music, turn on all the lights, buy the flowers and know that this too will pass. Before we know it the spring will come again.
I haven't been out in the studio for a week...I pulled back muscles in my exuberance to try out weaving again. Apparently I need to train for that too.
So today I'm finally feeling less sore and will head back there....but to paint! If I can still remember how!l Love you and your work too!

I have been loving January even coping with some kind of bug. An amazing feeling of joy and
hope invaded me, and even though I didn't get an answer on what to do from the doctors,
I followed my own advice to take it ridiculously easy. Love the photo of your family.
And I'm so glad you're going to get back to painting. I do so love your glorious work!