A birdie with a yellow bill 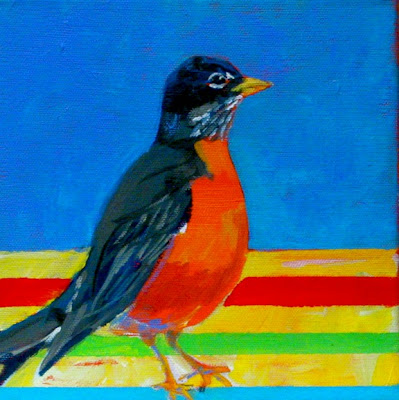 People who poo poo (say it isn't so) global warming frequently
site days like today as an example. Imagine saying in a
not especially bright voice, (hard I know) "Global warming?
Give me a break!" or "So much for global warming."
Those of us with at least as much brain power
as the bird I'm featuring today know that erratic weather
is one of the signs of climate change.

Plus the predicted snow we were supposed to have today,
but didn't, is not that unusual in April. What is unusual,
and apparently one sign of global warming, is that the birds
are confused by the aberrant fluctuations in weather, and
are appearing both earlier in the year, and later in the fall
than was the norm even five years ago. Steven saw robins
in the park early in February -- flocks of them. Sorry
folks, but that ain't right.

Still I know why we don't want to know. For one thing
it's cheering to see robins, as long as they can somehow
stay warm enough. I am crazy about the birds. So
today I did a little painting of one visiting a sunny
outdoor table. I'd love it if they were more friendly,
but I'm also delighted to see them where they belong,
singing their hearts out in our cherry tree.

My mother used to wake me up in the morning with
this poem.

Time to rise
by Robert Louis Stevenson,
from A Child's Garden of Verses

A birdie with a yellow bill
Hopped upon the window sill
Cocked his shining eye and said:
"Ain't you 'shamed, you sleepy-head?"

Have a holding-the-earth-in-your-hand-in-wonder day.
Posted by Barbara Muir at 5:52 PM

Email ThisBlogThis!Share to TwitterShare to FacebookShare to Pinterest
Labels: Robin. painting birds again. thinking about the planet. Have a super Sunday.

Hi Barbara, I really am enjoying the bird paintings. I really like the Blue Bird in the Post
"Thinking Simple." The Robins here in Colorado seem to be pretty much on schedule. We're seeing a few around already but not too many.It's always a "OH boy, here comes spring" thing to see them show up.
keep smilin! EW

As a chronic oversleeper, I'll have to copy out that RLS poem!
Love the bird--he's so alert-looking.
I heard someone say we should call it "global weirdness," because of the unpredictable (and therefore potentially catastrophic) weather; not global "warming," which sounds kind of pleasant!

Thank you. They started as an idea to
go with my new big painting, but I'm not sure if that's how I'll use the concept or not. Glad you're liking them and that your robins are back.

Talk to you soon,