The intelligence of desire 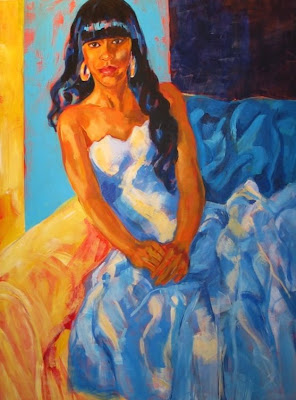 I've had some pretty interesting conversations
in the past couple of days about passion and
its opposite -- in this case I mean lethargy.
There is probably data to back me up on this --
the new studies released almost daily about
the brain, seem to indicate I could be right.
But it seems that in the majority of cases,
what we desire is what's best for us. Isn't
it odd that people spend their whole lives
running away from that strong internal voice
that says -- no don't do that, do this. As in
don't be an accountant, be a painter.

The argument I hear for going against
your desire/instinct/sixth sense/inner
voice over and over is that it isn't practical.
But then I hear about wealthy people's
children locked up in mental wards of
hospitals because they can't stop harming
themselves, and kids needing to drink
themselves into oblivion every day, because
their parents want them to be _______
fill in the blanks, and they have to forget
their dreams.

It seems that we regularly fail in some way
when we don't follow our desires -- for
a certain mate, for a certain job, for a
certain creative pursuit. It isn't crazy,
or selfish, or narcissistic. Do what you
want to do. That doesn't mean harming
others -- it means figuring out what you
love to do, and doing it for at least part
of every day. For me that's painting.

Have a desiring-intelligent-desire day
Posted by Barbara Muir at 7:13 PM

Email ThisBlogThis!Share to TwitterShare to FacebookShare to Pinterest
Labels: intelligence. desires. we are right about ourselves. Believe it.

I agree that feeding your soul is anything but selfish. It actually makes us better able to give. What could be more practical than that? Must stick with that great dog wisdom!

This portrait is looking great!
XOXO

It's true isn't it. When we love what we do, that happiness spreads out into the rest of our lives, and into the world.

Thanks for being one of the people who
makes my world a happy place.