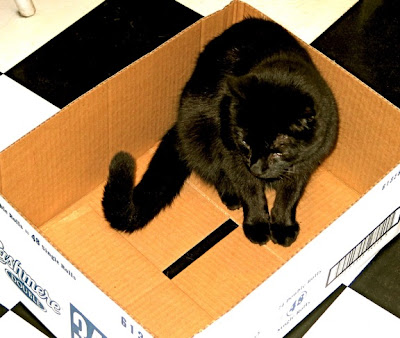 Timbah the cat
Black short hair
in a box
I've been working too hard at other things to
paint today, but I thought I'd give the stage to
one of my cats, to stop the animals from becoming
jealous of one another.

Timbah, our four-year-old black cat, is quite the quirky
individual. We've been thinking that he's
crazy, but lately I've been wondering if that's just a
foolish human notion. He may in fact be very smart.
As soon as my husband leaves the house, to go for a
walk, or to work, the cat starts yelling. But that's not
all, while he's yelling, he carries something from
the laundry table in the basement upstairs to me on the
second floor. Yelling, yelling and yelling. For quite
a while it was socks (mine), then one day when I
had to go somewhere a little special -- it was a cleaned
pair of white fleece gloves - perfect!

But in the past two weeks when my husband has
been working at the office instead of in his home office
most of the time, Timbah has started bringing me
larger items -- my track pants for instance. And
today he thought I should be a bit stylish for the
last day of school for this year, and
brought me a beaded dress top.

So I think he's actually trying to take care of me.
The track pants? Maybe he sees that I sit down
too much when I'm marking, and he's right I need
more exercise. The beaded dress? Well we were
having end-of-term parties in my class today.
Of course after the dress had been dragged over
the floor it was not really wearable. But the
thought was there.

2. It's always good to be beautiful, wash your face.

6. If it's dinner time race around the house
or yell, until someone notices the time.

7. Two cats are better than one, for naps,
and for negotiating dinner, opening doors,
and playing games.

8. If the dog's lying in front of the heat vent,
curl up behind her and stick one paw against
her back. If she doesn't move, get up and lick
her ear.

Have a-contented-as-a-happy-cat day.
Posted by Barbara Muir at 8:43 PM

Email ThisBlogThis!Share to TwitterShare to FacebookShare to Pinterest
Labels: cats. equal time. no house is complete without one. Two are better than one.

What a sweetie! Yes, I'd say he's definitely got a nurturing instinct... or perhaps an indoor cat's misguided sense of 'hunting'... although he obviously feels the need to take care of you. Lucky you!

I've had cats all my life, Barbara, and I have never heard of cat doing what Timbah does! Maybe he wants to make a bed for you ... It's extraordinary--and idiosyncratic, as each cat is!

I just found you through R Garriott's blog and I really love your painting style! I look forward to seeing more.

My cats will do the meowing-while-dragging-something thing every few days; from what I've read it's their way of trying share their kill with you, so I guess it's supposed to be a compliment. And one used to do what Timbah does and would drag all sorts of articles of clothing out of my closet, but thankfully he grew out of it! When they do get in those moods I usually drag out one of their battery powered toys to distract them until they get bored and to give myself some peace and quiet.

Hi R.,
I think our Timbah is nurturing, and
worries about my busy schedule.

I am very lucky.

It's sweet. It's true each cat, and each animal is so different. Isn't that wonderful!

We've tried the toy strategy, but Timbah doesn't play with toys. No...I think he's observed me, and is trying to help me out in my scattered life. He doesn't bring clothes (the correct clothes) to anyone else in my family of four. Funny eh?

Thanks for the tips.