Life with cats and dogs 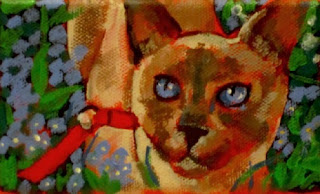 Simone in the Forget-Me-Nots
Acrylic on canvas
(work in progress)
5 x 3 inches
Barbara Muir © 2010
For those of us who paint in response to real life, it's
hard to resist turning to the cats and dogs who populate
our world for subject matter.  Take today for
instance I found a small canvas just begging for
a painting.  Thinking of the superb small paintings
Belinda Del Pesco does, I thought "Hmmm what about
a cat?" I searched through Steven's wonderful albums and
found one of my favorite pictures ever of Simone in
the Forget-Me-Nots.  Simone was a wonderful cat, and
she liked to go outside.  But Siamese are not really safe
left to wander, because people either want them, or are
frightened by their yawly speech, and hurt them.  So
Simone went out on a red leash, just into the backyard
during her lifetime.  Her eyes were almost the exact colour
of the Forget-Me-Nots.  She was a spectacularly loving and
wonderful cat.

Our Siamese now -- Fiona, has been with us since November
2007.  I bought her while I was still devastated with the loss
of Simone, who died after exploratory surgery.  I'm so glad I
did.  She has been a comfort and joy ever since I first set eyes
on her.  I read in the paper a few weeks ago that it takes
14 parts of the brain to fall in love, and it happens in five
seconds.  That's about right when it comes to me and Fiona.

The Heater Wars are on again.  Watch how Fiona steals that
coveted spot away from our dog Zoey. 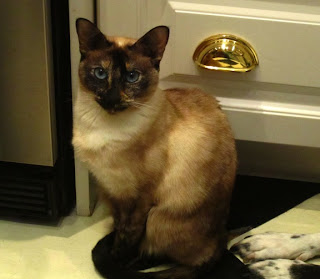 It is getting cold, so the animals position themselves
near the heat vent from the furnace.  The warmest one is
under the kitchen counter. This is Fiona next to
the feet of our dog, Zoey. 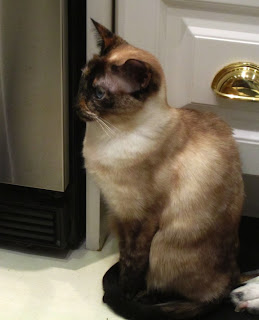 Fiona feigns disinterest.  She's just
there for a friendly chat.  She can
take or leave the heater.  It's no
big deal. 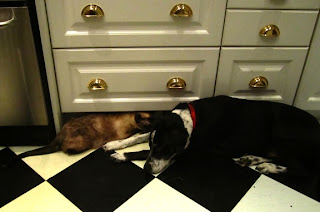 But she's so tired, so she decides just to lie
down with Zoey -- nice and friendly. 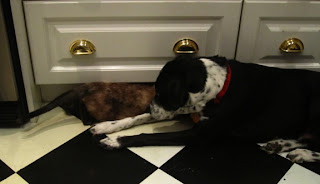 But she's not quite warm enough so she
decides to burrow in a bit more behind
Zoey.  In the process she may just lick a
very sensitive place on Zoey's leg. 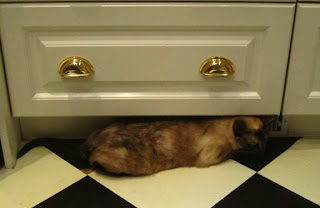 And voila -- what a surprise -- Zoey leaves.
This was not a calculated move on Fiona's
part.  She keeps trying to talk to Zoey
about co-operation, but Zoey is jumpy-- what
can you expect -- she's a dog. 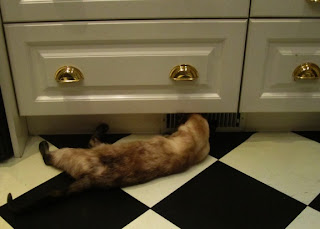 Ah well she says.  If people want to be that

sensitive.  Let them -- meanwhile I think
I'll put my front paws right on that
heat vent.  Now that's so much better.
Have a loving-the-animals-who-make-life-great day.
Posted by Barbara Muir at 9:49 PM