Will this wind be so mighty? 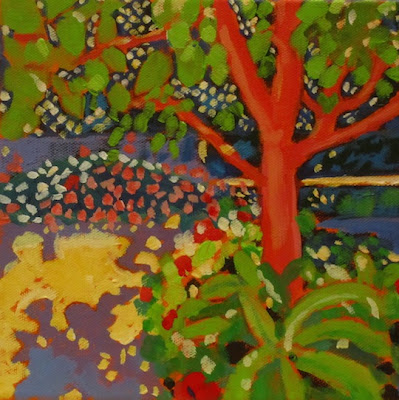 Sean's Garden
(work in progress)
Acrylic on canvas
8 x 8 inches
Barbara Muir © 2010
Windy doesn't quite cut it when you're talking about
this day.  It was windyyyyyyyyy.  And in between my front
doors blew some delightful mail from a friend far
away that cheered me mightily in a long day of
teaching, marking and more marking.  I was inspired
to paint by images of a great art show south of the
border.  In the midst of a whirlwind
of activity, after nearly being blown away up to
the seagulls and their insane aerobatics high up
in the clouds, I was  buoyed psychologically
by this real mail,  delivered by the mail carrier,
(who ever since my appearance on Oprah always calls
me movie star).

Did I say there was candy in the package too?
There was, and I have not eaten all
of it.  But how perfect for the day -- the end of term,
several shows pending, work to do, commissions to
complete -- and an unexpected treat.  Today a letter
with candy in it, could not be any closer to nirvana.

Two more gigantic piles of marking and I escaped
to work on my painting.  I think I've been greatly
influenced by a delightful show Steven and I saw a
week ago at the Art Gallery of Ontario called Maharajah.
The work in the show is wonderfully intricate -- not
always my thing, but in this case, captivating.

Have an enjoying-the-intricacies-of-nature day.
P.S. about two years ago I learned that my sons' great,
great, great grandmother was a Maharani in Indonesia.  I know
very little about her, except that my mother-in-law, her
descendant has a black and white photo showing her on
her throne dressed in highly ornamented, ceremonial
attire.
Posted by Barbara Muir at 11:24 PM

Sean's garden is coming along beautifully. Your color palette is so rich and I like the abstract feeling. Looking forward to seeing the finished piece.

Thanks so much Linda,

I am happy with it so far. I really appreciate your kind comments.

Barbara, I always feel so at home with all of your warm colors and in this one the gold next to the purple is warm and rich....mmmmmmm!(I look forward to seeing in finished...please don't have us wait as long as Alex's....)

Those colors and shapes in the left portion of your painting knock me out. There is some kind of happy resonance going on there. Really love the painting.

There was an artist who won mega bucks in a British art competition, sorry that I can't remember it now, a woman artist in fact, who only paints eight paintings a year. Amazing.

Well there is a lot going on right now, but this little painting is almost done -- just some slick touches needed. So I'm sure you won't have to wait three months to see it done. You are so sweet. Love your painting that just sold, and I'm not surprised.

The light in my garden is odd because it filters through a lattice fence (the starry part, and then dark bushes block the lovely fence light at the far side of the apple tree, and no flowers grow there. Then of course under the apple tree large leaves grow on my Nicotiana and very few blooms. Almost finished this one, and I'm glad you like it. It's small but powerful. Love your most recent painting big time -- such a ms.terful touch.

Reading your PS, you are a Queen, Barbara. Well, looking at your richly colored paintings, you are one already.

Any art which originates from the historical V&A collection is drool-worthy. I had the luck to see a travelling exhibition in my city few months ago.